Top US trade negotiator Katherine Tai and Chinese Vice Premier Liu He spoke in "constructive exchanges in an attitude of equality and mutual respect".

Trade officials from the US and China have held "candid, pragmatic" talks, says China's commerce ministry, their first discussions under the Biden era as Washington scrutinises whether Beijing is holding up its end of a trade pact.

The two countries signed a so-called "phase 1" agreement in January 2020, in which Beijing pledged to increase its purchases of American products and services by at least $200 billion over 2020 and 2021.

But top US trade negotiator Katherine Tai has said she is analysing whether the terms of that pact have been met by China, with some experts saying Beijing is falling up to 40 percent short on its agreement to buy US goods.

On Thursday, China's commerce ministry statement said Chinese Vice Premier Liu He and Tai spoke in "constructive exchanges in an attitude of equality and mutual respect".

The "phase one" deal aimed to end a damaging two-year trade war launched by former president Trump, which battered relations between the two countries.

It commits China to buying tens of billions of dollars' worth of American agricultural goods, energy and services in exchange for slashing Trump-era tariffs on $120 billion of Chinese exports.

However, a 25 percent levy on a further $250 billion of Chinese goods remains.

A short statement from the Office of the US Trade Representative confirmed the "introductory virtual meeting" between Tai and He.

"During their candid exchange," Tai laid out the "guiding principles of the Biden-Harris Administration's worker-centered trade policy... while also raising issues of concern".

Biden's administration has not rowed back on the tough trade rhetoric, insisting it will keep those tariffs in place for now as he looks to reboot the American economy, which was hit hard by the pandemic early on but has regained its footing.

On its side, China has maintained duties on some imports from the United States.

China's economy has bounced back on exports during the pandemic.

Beijing was the first major economy to virtually extinguish the coronavirus outbreak inside its borders, leading to a rebound of economic activity, especially at the factory gate.

Sales of Chinese-made goods have soared across the rest of the world, which has in large areas seen people trapped at home. 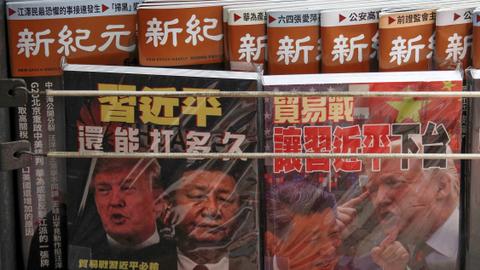