A US District Court judge says he will announce on Thursday whether to grant a restraining order to force the White House to return the press pass of reporter Jim Acosta.

Judge Timothy Kelly heard arguments on Wednesday from lawyers for CNN and the Justice Department.

But the dynamic devolved into a near-shouting match during a combative press conference last week following elections in which Republicans lost control of the House of Representatives.

The CNN lawsuit calls the revocation "an unabashed attempt to censor the press."

Other organizations, including The Associated Press and Fox News, have filed amicus briefs in support of CNN.

Earlier, Trump's administration contended it had "broad discretion" to regulate press access to the White House.

In a legal filing ahead of the hearing, the government argued it "was lawful" to punish Acosta for his behavior during a contentious Trump press conference last week.

It rejected the idea that Acosta was "otherwise eligible" for White House access.

The Republican president has steadily intensified his criticism of the media, with CNN remaining a major target.

Trump erupted into anger last week during a news conference when Acosta questioned him about the so-called migrant caravan traveling through Mexico and about an ongoing investigation into Russian meddling in the 2016 presidential election.

"That's enough, that's enough," Trump said on November 7, as a White House intern attempted to take the microphone off Acosta.

"You are a rude, terrible person."

The White House suspended his credentials later that day, with press secretary Sarah Sanders accusing Acosta of putting his hands on the intern who was forcefully trying to take the microphone away from him.

Video of the encounter showed Acosta pulling back as the intern moved to take the microphone.

He called the White House accusations a lie. 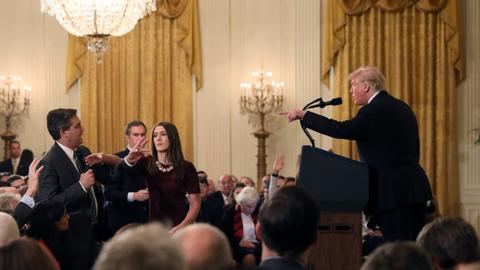