Johns Hopkins University says the lives lost in the US due to Covid-19 are about equal to the population of Kansas City, Missouri, and greater than that of Miami; Raleigh, North Carolina; or Omaha, Nebraska.

The Covid-19 death toll in the US has topped 500,000, all but matching the number of Americans killed in World War II, Korea, and Vietnam combined.

The lives lost, as recorded by Johns Hopkins University and Worldometer tracker, are about equal to the population of Kansas City, Missouri, and greater than that of Miami; Raleigh, North Carolina; or Omaha, Nebraska.

It is roughly equal to the number of Americans killed in World War II, the Korean War, and the Vietnam War combined.

And despite the rollout of vaccines since mid-December, a closely watched model from the University of Washington projects more than 589,000 dead by June 1.

The US toll is by far the highest reported in the world, and the true numbers are thought to be significantly greater, in part because of the many cases that were overlooked, especially early in the outbreak.

An emotional President Joe Biden called the milestone of more than 500,000 US deaths from Covid-19 "heartbreaking" and urged the country to unite against the pandemic.

"I know what it's like," Biden said in a national television address, referring to his own long history of family tragedies.

"I ask all Americans to remember, remember those we lost and those they left behind," Biden said. "I also ask us to act, to remain vigilant, to say socially distant, to mask up, to get vaccinated."

Biden, accompanied by his wife Jill and Vice President Kamala Harris and her husband Doug Emhoff, then stood outside the White House to mark a moment's silence in front of 500 candles representing the huge toll.

Earlier, flags were lowered over the White House and at federal buildings across the country and at embassies around the world. The United States has the world's highest death toll.

Biden urged Americans to mourn and to remember those lost but also to show determination.

"As a nation, we cannot and must not let this go on," he said.

"We must end the politics and disinformation that's divided families, communities," he said. "We have to fight this together as one people, as the United States of America."

Average daily deaths and cases have plummeted in the past few weeks, but experts warn that dangerous variants could cause the trend to reverse itself.

Some experts say not enough Americans have been inoculated yet for the vaccine to be making much of a difference.

Instead, the drop-off in deaths and cases has been attributed to the passing of the holidays; the cold and bleak days of midwinter, when many people are inclined to stay home; and better adherence to mask rules and social distancing.

"The original phase three trials suggested 50% efficacy between the first and second dose, but we're getting reports...that there may be higher levels of protection after a single dose," says Bill Moss of @IVACtweets.

The first known deaths from the virus in the US happened in early February 2020.

US Senator John McCain, ex-POW and political maverick, dead at 81 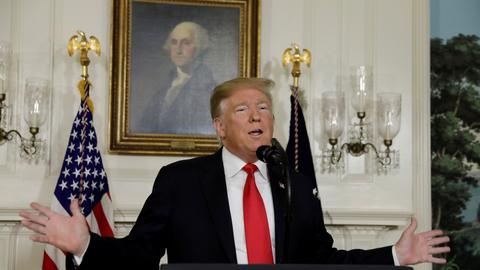