The program grants immigrants who cannot return to their countries safely, for reasons such as natural disasters or armed conflict, the ability to stay and work in the United States legally for a defined period that can be renewed.

The Biden administration is granting temporary deportation relief and work permits to Myanmar citizens living in the United States because of the military's crackdown following the February 1 coup, the Department of Homeland Security (DHS) said.

The decision means about 1,600 Burmese already in the United States, including diplomats who have broken with Myanmar's junta, will be eligible for Temporary Protected Status (TPS) for 18 months, two administration officials told Reuters.

The program grants immigrants who cannot return to their countries safely, for reasons such as natural disasters or armed conflict, the ability to stay and work in the United States legally for a defined period that can be renewed.

A family mourns another young man killed in #Myanmar yesterday. They say the security forces have not returned his body. His name was Lin Htet. He loved K-Pop and Blackpink whose singer, Rose, released a solo album today that he will not hear. #WhatsHappeningInMyanmar pic.twitter.com/kH5vNeZuew

"Due to the military coup and security forces’ brutal violence against civilians, the people of Burma are suffering a complex and deteriorating humanitarian crisis in many parts of the country," said Secretary of Homeland Security Alejandro Mayorkas.

Only people who are already residing in the United States and can demonstrate continuous residence as of March 11, 2021 are eligible for the Myanmar program.

The administration officials said the situation in Myanmar after the military seized power prevents Burmese from returning, citing the violent crackdown by security forces, arbitrary detentions, and worsening humanitarian conditions.

Thomas Andrews, the United Nations human rights investigator on Myanmar said on Thursday the junta had killed at least 70 people and detained more than 2,000.

Some Myanmar diplomats posted to the United States have spoken out publicly against the military, including Permanent Representative to the United Nations Kyaw Moe Tun.

Diplomats who "bravely joined the civil disobedience movement in solidarity with their countrymen back home" would be able to stay in the United States under the program, one official said.

"We want them to know they can do that safely," the official said.

The US officials said unless the military reversed course, more punitive action was likely. "If they do not restore democracy and cease violence against civilians, then we will continue taking actions ... against military leaders and their financial networks," one official said.

Day temperature is getting too extreme for many of us. So, all Myanmar people fliped the strike to the night by disobeying the curfew. It has huge success, dozen of people joined in their own community even on the first day. More success will follow. #WhatsHappeningInMyanmar pic.twitter.com/HxNqs3Tx0W

President Joe Biden last month rolled out Myanmar sanctions on those responsible for the ouster of the southeast Asian nation's civilian-led government, including the defence minister and three companies in the jade and gems sector.

Earlier this week, Washington imposed sanctions on two children of military leader Min Aung Hlaing, who had already been designated, and six companies they control.

But it has so far held back from sanctions against military conglomerates Myanmar Economic Corporation and Myanmar Economic Holdings Limited, among those used by the military to control vast swathes of the economy.

"We are looking at military-owned enterprises," the official said. "The gravity of the crisis on the ground means that one set of tools is not going to be sufficient." 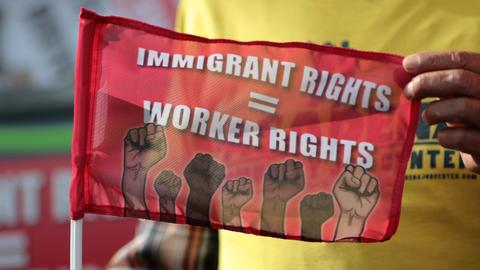 Judge bars US from ending protections for immigrants from four countries