The move angered EU as well as Mexico while Canada retaliated by saying it will impose tariffs covering $12.8 billion on imports from the US. The US tariffs come into effect on Friday.

The United States said on Thursday it would impose harsh tariffs on steel and aluminum imports from the European Union, Canada, Mexico at  0400 GMT on Friday – another move sure to anger Washington's trading partners.

The announcement by Commerce Secretary Wilbur Ross was sure to cast a long shadow over a meeting of finance ministers from the world's Group of Seven top economies that opens later in the day in Canada.

Ross said talks with the EU had failed to reach a satisfactory agreement to convince Washington to continue the exemption from the tariffs imposed in March.

Meanwhile, negotiations with Canada and Mexico to revise the North American Free Trade Agreement were "taking longer than we had hoped" and there was no "precise date" for concluding them, so their exemption also would be removed, Ross told reporters.

The announcement was confirmed by presidential proclamation shortly after Ross addressed reporters.

Despite weeks of talks with his EU counterparts, Ross said the US was not willing to meet the European demand that the EU be "exempted permanently and unconditionally from these tariffs."

"We had discussions with the European Commission and while we made some progress, they also did not get to the point where it was warranted either to continue the temporary exemption or have a permanent exemption," Ross said.

In reaction to the US decision, Canada, the largest supplier of steel to the US, will impose tariffs covering $12.8 billion on imports from the US, including whiskey, orange juice, steel, aluminum and other products, Foreign Minister Chrystia Freeland said.

"The American administration has made a decision today that we deplore, and obviously is going to lead to retaliatory measures, as it must," Prime Minister Justin Trudeau said.

French President Emmanuel Macron is calling the US decision to levy tariffs on the European Union "illegal" and a "mistake."

Macron said that he deplores the US action and that he plans to speak with US President Donald Trump later Thursday telling him just that.

The French president said the tariff move does not in line with international trade law that the United States, France and Europe have subscribed to.

He stressed that there would be a European response.

Macron, who was the first foreign leader invited by Trump to a state visit, said the US president's decision is a mistake because it creates economic and commercial nationalism.

He ominously recalled the pre-World War II period saying, "Economic nationalism leads to war. This is exactly what happened in the 1930s."

Ross downplayed the threats of retaliation from those countries, but said talks could continue even amid the dispute to try to find a solution.

And President Donald Trump has the authority to alter the tariffs or impose quotas or "do anything he wishes at any point" – allowing "potential flexibility" to resolve the issue.

Trump imposed the tariffs of 25 percent on steel and 10 percent on aluminum using a national security justification, which Ross said encompasses a broad array of economic issues.

South Korea negotiated a steel quota, while Argentina, Australia and Brazil have arranged for "limitations on the volume they can ship to the US in lieu of tariffs," Ross said.

"We believe that this combined package achieves the original objectives we set out, which was to constrict imports to a level to allow those industries that operate domestically to do so on a self-sustaining basis going forward."

Within hours, Mexico had responded to US steel and aluminum tariffs by imposing wide-ranging "equivalent" measures on farm and industrial products.

The Mexican measures, which target pork legs, apples, grapes and cheeses as well as steel, could hit farm states that are a bastion of support for US President Donald Trump, ahead of American midterm elections in November.

The Mexican measures, announced by the country's economy ministry will be in place until the US government eliminates its tariffs.

"Mexico profoundly regrets and condemns the decision by the United States to impose these tariffs on imports of steel and aluminum from Mexico," the ministry said.

"Mexico reiterates its openness to constructive dialogue with the United States, its support for the international commerce system and its rejection of unilateral protectionist measures," it said.

Mexico buys more steel and aluminum from the United States than it sells. It is the top buyer of US aluminum and the second buyer of US steel, the economy ministry said.

President of European Commission Jean-Claude Juncker voiced his concern over the tariffs.

"I am concerned by this decision. The EU believes these unilateral US tariffs are unjustified and at odds with World Trade Organization rules," Juncker said in a statement.

"This is protectionism, pure and simple. Over the past months we have continuously engaged with the US at all possible levels to jointly address the problem of overcapacity in the steel sector," he said.

Juncker said overcapacity has remained at the heart of the problem and that the EU was not the source of but on the contrary equally hurt by overcapacity.

"It's a bad day for world trade. US leaves us no choice but to proceed with a WTO dispute settlement case and the imposition of additional duties on a number of US imports," he said.

He also said the EU would defend its interests in full compliance with the international trade law.

The decision also came under fire from members within the Republican Party.

Kevin Brady, the chairman of the US House Ways and Means Committee, said that the tariffs are"hitting the wrong target" and officials will need to provide answers to Congress about the damage to local businesses.

"When it comes to unfairly traded steel and aluminum, Mexico, Canada and Europe are not the problem – China is," said Brady, a senior Republican.

"These tariffs are hitting the wrong target."

Brady urged the administration in a statement to exempt the imports from "these important national security partners" and added that administration officials "will need to come to Capitol hill to provide answers about the indiscriminate harm these tariffs are causing our local businesses."

On Twitter, Simsek said that there are no winners to the protectionism game and chaos is the alternative to the existing rules-based system. 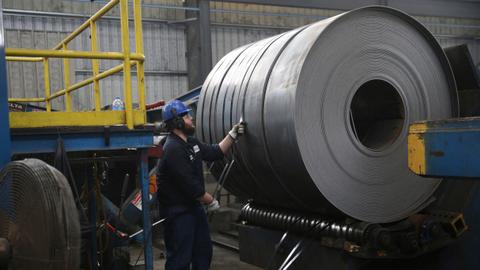