US Secretary of State Tillerson called to step up the US-led "maximum pressure" campaign against North Korea by thwarting sanctions evasion and interdicting ships conducting illicit trade with the nation.

The world needs to step up pressure on North Korea to force it to abandon its nuclear weapons programme and should not be fooled by a charm offensive in engaging South Korea, participants at a 20-nation meeting on North Korea said on Tuesday.

"We must increase the costs of the regime's behaviour to the point that North Korea must come to the table for credible negotiations," US Secretary of State Rex Tillerson told the one-day meeting he is co-hosting with Canada in Vancouver.

North Korean leader Kim Jong-un has refused to give up development of nuclear missiles capable of hitting the United States in spite of increasingly severe UN sanctions, raising fears of a new war on the Korean peninsula.

Japanese Foreign Minister Taro Kono said the world should not be naive about North Korea's "charm offensive" in engaging in talks with South Korea ahead of next month's Winter Olympics in Pyeongchang, South Korea.

"It is not the time to ease pressure, or to reward North Korea," he said. "The fact that North Korea is engaging in dialogue could be interpreted as proof that the sanctions are working."

Tillerson said North Korea must not be allowed "to drive a wedge" through allied resolve or solidarity and reiterated Washington's rejection of a Chinese-Russian proposal for the United States and South Korea to freeze military exercises in return for a freeze in North Korea's weapons programs.

He said the Vancouver gathering, which groups backers of South Korea during the 1950-53 Korean War, would aim to improve the effectiveness of the US-led "maximum pressure" campaign on Pyongyang and combat its attempts to evade sanctions.

He urged China and Russia, which backed the North in the war and which are not attending the Vancouver meeting, to fully implement UN sanctions.

"We cannot abide lapses or sanctions evasion. We will continue to call attention to, and designate, entities and individuals complicit in such actions," he said.

Resistance to US call

China and Russia have sharply criticised the Vancouver meeting, which was announced after North Korea tested its biggest ever intercontinental ballistic missile in late November, as an example of "Cold War" thinking. While both have signed up to UN sanctions, they have been accused of not doing enough to ensure proper implementation, something they deny.

Earlier on Tuesday, Chinese state media said Chinese President Xi Jinping told US President Donald Trump in a phone call that unity on the North Korean issue was extremely important and the hard-earned easing of tensions must continue.

The White House said Trump and Xi both expressed hope that the resumption of North-South dialogue might prompt a change in Pyongyang's "destructive behaviour," but Trump also committed to sustain the maximum pressure campaign.

North and South Korea held formal talks for the first time in two years this month and Pyongyang said it would send athletes to the Olympics. 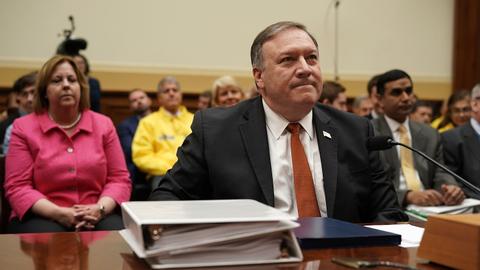 US will walk away if talks with N Korea fail, Pompeo says