Nikolas Cruz had pleaded guilty in October to 17 counts of first-degree murder and is now contesting the death penalty sentence that prosecutors are seeking.

A young man who gunned down 17 people at his former high school in Parkland, Florida is set to go on trial, with jurors expected to hand down either the death penalty or a life sentence.

The trial is set to begin on Monday to determine Nikoas Cruz's sentence. The death penalty requires a unanimous decision by the jury; Cruz will otherwise be handed life without parole.

He has already pleaded guilty to 17 counts of first-degree murder and 17 counts of attempted murder for those wounded during the massacre.

Cruz — who was 19 at the time — had bought the weapon he used in the 2018 attack legally, despite having a documented history of mental health problems.

Expelled from school for disciplinary reasons, Cruz was known to be fixated on firearms — and had reportedly been identified as a potential threat to his classmates.

On the day of the attack he arrived at the school in an Uber, began shooting at students and staff, and fled nine minutes later, leaving behind a scene of carnage. He was arrested nearby shortly afterward.

Footage recovered from his phone showed he had filmed his plans to attack his former school, saying his goal was to kill "at least 20 people."

The Florida shooting stunned a country accustomed to gun violence and sparked new efforts, led by students from the school itself, to get lawmakers to pass tougher gun control laws.

Parkland survivors founded "March for Our Lives," organising a rally that drew hundreds of thousands of people to Washington, DC in 2018.

Thousands turned out for demonstrations organised by the group last month following two other mass shootings: one at a Uvalde, Texas elementary school and another at a New York supermarket

Those shootings helped galvanise support for the first significant federal bill on gun safety in decades which President Joe Biden signed the bill into law in late June.

It included enhanced background checks for younger buyers and federal cash for states introducing "red flag" laws that allow courts to temporarily remove weapons from people who are considered a threat.

According to the Gun Violence Archive website, more than 24,000 people have been killed by firearms in the United States so far this year, including more than 13,000 who died by suicide. 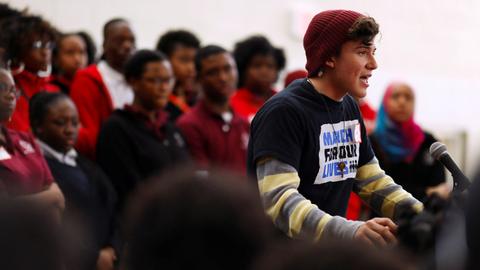