If the UN council backed the statement pushed by the US, it would effectively recognise opposition leader Juan Guaido as Venezuela's head of state. But Moscow says it would oppose the move.

The United States is pushing for a UN Security Council statement expressing full support for Venezuela's National Assembly as the country's "only democratically elected institution," but Russia is expected to block the move, diplomats said on Friday.

The council will meet on Saturday at the request of the United States after Washington and a string of countries in the region recognised Venezuelan opposition leader Juan Guaido as head of state and urged President Nicolas Maduro to step down.

US Secretary of State Mike Pompeo and Venezuela's Foreign Minister Jorge Arreaza, along with several other ministers, are due to address the 15-member body. Ahead of the public meeting, the United States circulated a draft Security Council statement.

The draft, seen by Reuters, said: "As conditions in the Republic of Venezuela continue to deteriorate, the Security Council expresses its full support for the National Assembly as Venezuela's only democratically elected institution."

If the council backed the statement, it would effectively recognise Guaido - who is head of the National Assembly - as Venezuela's head of state. Guaido declared himself the country's interim president on Wednesday.

However, Russia's UN Ambassador Vassily Nebenzia said on Friday that Moscow would oppose a US push for the Security Council to back Guaido as interim president. Council statements must be agreed by consensus.

Before Washington circulated the draft statement to council members late on Friday, Nebenzia told Reuters: "That will not pass ... For us nothing changes."

The draft statement also "calls for the immediate start of a political process that leads to free, fair and credible elections with international electoral observation in the shortest possible time."

America stands by the people of #Venezuela as they rise up against authoritarian rule and demand respect for human rights and democracy.

During Saturday's Security Council meeting, Pompeo will urge council members and other countries to recognise Guaido, the State Department said in a statement on Friday.

The Inter-American Commission on Human Rights is granting precautionary measures to protect Venezuelan opposition leader Juan Guaido and his family.

The human rights body of the Organization of American States considers that his life, personal integrity and personal freedom are at "urgent and grave risk." It is asking that Venezuelan authorities adopt the measures necessary to protect the president of the National Assembly.

Three lawyers working on behalf of Guaido say their request for precautionary measures does not equal a recognition of the legitimacy of the Maduro administration.

The commission has the authority to grant precautionary measures as a way to request state protection for persons at urgent and grave risk of suffering irreparable harm.

Guaido stepped up his campaign to oust Maduro on Friday, calling for a "major demonstration" and rejecting an offer of talks with the socialist leader.

Guaido, who proclaimed himself acting president during street rallies by tens of thousands on Wednesday, said he wouldn't attend a "fake dialogue" on a crisis that has left 26 dead this week in clashes between anti-Maduro activists and security forces.

After four years of economic pain that has left Venezuelans short of food and medicine and driven more than two million to flee the country -- which sits on the world's largest oil reserves -- the opposition found its voice this month in Guaido after Maduro was sworn in for a second presidential term following controversial elections. 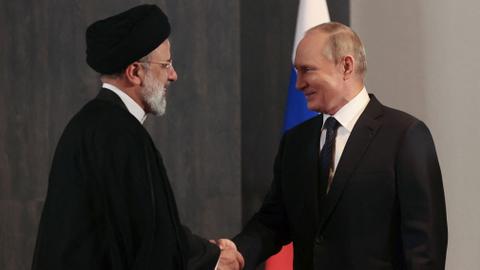 US vows to disrupt 'unprecedented level' of Russia-Iran defence ties