Gunman kills at least 19 children and two teachers at an elementary school in south-central Texas state before being shot dead by responding police, officials say.

At least 21 people including 19 children have been killed in a shooting at a Texas elementary school, and the 18-year-old gunman is dead, US officials said.

Texas Senator Roland Gutierrez who was briefed by Texas Rangers said on Tuesday that 18 children and three adults were killed in the mass shooting at Robb Elementary School in Uvalde town. Later, US authorities said the dead included 19 children and two teachers.

Greg Abbott, governor of the south-central US state, said the assailant "shot and killed, horrifically and incomprehensibly."

He said that the suspect, identified as Salvador Ramos, was apparently killed by police officers, and that two officers were struck by gunfire, though the governor said their injuries were not serious.

Law enforcement officers saw the gunman, clad in body armour, emerge from his crashed vehicle carrying a rifle and "engaged" the suspect, who nevertheless managed to charge into the school and open fire, Texas Department of Public Safety (DPS) Sergeant Erick Estrada said on CNN.

It was the deadliest such incident since 14 high school students and three adult staff were killed in Parkland, Florida in 2018 –– and the worst at an elementary school since the 2012 Sandy Hook shooting in Connecticut, in which 20 children and six staff were killed.

– We must ask when we will stand up to gun lobby
– Idea that an 18-year-old kid can buy assault weapons is wrong
– How many scores of school children must see friends die like they're on a battlefield?

Biden vows 'time to turn this pain into action'

US President Joe Biden called for Americans to stand up against the country's powerful pro-gun lobby after the school massacre.

"When, in God's name, are we going to stand up to the gun lobby," he said in an address from the White House.

How many scores of school children must see friends die like they're on a battlefield, he asked.

With first lady Jill Biden standing by his side in the Roosevelt Room, Biden added, "I am sick and tired. We have to act."

Biden also ordered that the US flag at the White House be flown at half-staff, along with flags at the federal government and military buildings and vessels, "as a mark of respect for the victims of the senseless acts of violence," a White House statement said.

READ MORE: Five mass shootings in the US in 2022

Sen. Chris Murphy delivers remarks on Uvalde, Texas elementary school shooting: “What are we doing? What are we doing?…This only happens in this country and nowhere else. Nowhere else do little kids go to school thinking that they might be shot that day." https://t.co/Zh3OvUaIwm pic.twitter.com/TjJVoaFbRN

Ted Cruz, a Republican US senator from Texas, tweeted that he and his wife are "lifting up in prayer the children and families in the horrific shooting in Uvalde."

But Senator Chris Murphy, a Democratic from Connecticut, where the Sandy Hook shooting took place, made an impassioned appeal for concrete action to prevent further violence.

"This isn't inevitable, these kids weren't unlucky. This only happens in this country and nowhere else. Nowhere else do little kids go to school thinking that they might be shot that day," Murphy said on the Senate floor.

"I'm here on this floor to beg, to literally get down on my hands and knees and beg my colleagues: Find a path forward here. Work with us to find a way to pass laws that make this less likely," he added.

The massacre in Texas came less than two weeks after a gunman opened fire at a supermarket in Buffalo, New York, killing 10 Black shoppers and workers in what officials have described as a hate crime.

Uvalde is home to about 16,000 people and is the seat of government for Uvalde County. The town is about 120 kms from the border with Mexico.

Robb Elementary is in a mostly residential neighborhood of modest homes. There is a funeral home across the street from the school.

READ MORE: Vigils held in US after 'racist' mass shooting in New York 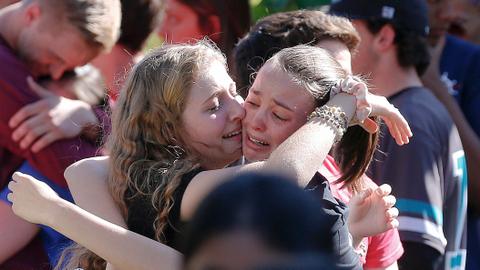