US Secretary of State Antony Blinken said growing food insecurity around the world "has been significantly exacerbated by the Russian aggression against Ukraine".

US Secretary of State Antony Blinken has said that Russia's restriction on Ukrainian grain exports may have contributed to Sri Lanka's turmoil and voiced fear it could spur other crises.

"We're seeing the impact of this Russian aggression playing out everywhere. It may have contributed to the situation in Sri Lanka; we're concerned about the implications around the world," Blinken told reporters in Bangkok on Sunday.

Renewing a demand that he has made repeatedly, Blinken called on Russia to let an estimated 20 million tonnes of grain leave Ukraine.

"What we are seeing around the world is growing food insecurity that has been significantly exacerbated by the Russian aggression against Ukraine," Blinken said.

Blinken said there was also an impact in Thailand where fertiliser prices have "gone sky high" due to the blockade.

"That's significant especially in a vibrant farming country like Thailand, because in the absence of fertiliser, we know that means that next year yields will go down, prices potentially will go up," Blinken said.

Sri Lanka has been wracked by weeks of turmoil triggered by severe shortages of food and fuel.

President Gotabaya Rajapaksa agreed to step down after protesters stormed his official residence on Saturday.

Russia says it would allow Ukrainian ships loaded with food products to leave if Ukraine's military demined its ports, an option rejected by Kiev, which fears for the safety of its Black Sea coast. 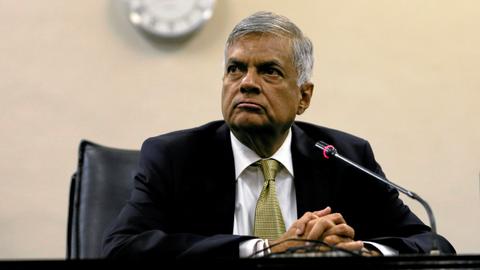