After months of study, Pentagon decides no immediate major changes are needed in global positioning of US forces but wants to counter China in Asia-Pacific region and Russia in Europe.

The US military will reinforce deployments and bases directed at China and Russia, even while maintaining forces in the Middle East adequate to deter Iran and militant groups, the Pentagon has said based on the results of a review.

The US Defense Department will be upgrading and expanding military facilities in Guam and Australia, underscoring its focus on China as the country's leading defence rival, officials said on Monday.

The details of the "global posture review," commissioned at the start of the administration of President Joe Biden early this year, would remain classified, the officials said, so as not to give secrets away to rivals or to reveal confidential plans with allies.

However, the review confirmed that the priority region for the US military was the Indo-Pacific [or Asia-Pacific], said Mara Karlin, a top Pentagon policy official.

The review "directs additional cooperation with allies and partners across the region to advance initiatives that contribute to regional stability and deter potential military aggression from China and threats from North Korea," she told reporters.

In addition, it "strengthens the combat-credible deterrent against Russian aggression in Europe and enables NATO forces to operate more effectively," she said.

Small changes, little by little, some in secret, over time...? This is not your father's "Pacific Realignment" or "pivot." // US Needs Indo-Pacific Force ‘Enhancements,’ Global Posture Review Finds https://t.co/vD4oMEKK3N via @DefenseOne

The Middle East, on the other hand, remains an area of flux for the Pentagon after the long wars in Iraq and Afghanistan.

"We have global responsibilities and must ensure the readiness and modernisation of our forces," Karlin said.

"These considerations require us to make continuous changes to our Middle East posture, but we always have the capability to rapidly deploy forces to the region based on the threat environment."

Speaking separately, a senior Pentagon official who declined to be identified downplayed any idea of radical shifts.

"In the first year of an administration, it's not the time when we would develop a major strategic-level change to our posture," the official said.

However, the official said, the Biden team felt the review necessary after the disruptive approach of his predecessor Donald Trump, who altered US commitments abruptly.

Under Trump, "there were oftentimes a devaluing of ally and partner input and engagement, which eroded US credibility and hard-won trust," the official said.

The officials declined to answer questions on how the global posture review sees US force presence in ongoing conflict zones like the Middle East, East Africa and West Africa, and Eastern Europe.

READ MORE: US renews 'Quad' with allies despite China warnings

But they confirmed previously announced plans to do more in Guam and Australia, to beef up defences against any threat from China.

In Guam, the Northern Mariana Islands and Australia there will also be upgrades to airports and fuel and munitions storage facilities, she said.

Asked if the review foresaw more increases in the US presence in the Pacific region, Karlin said: "We're moving the needle a bit."

"And what I'd like to think is, over the coming years, you will see that needle move more," she said.

READ MORE: Does the Quad alliance pose a serious threat to China? 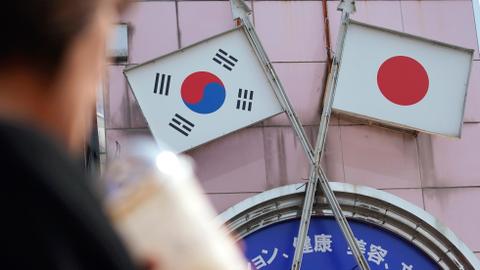