Venezuela's military affirmed it's stand with President Nicolas Maduro, dashing the oppositions hope's that they would oppose him.

The Venezuelan government lashed out against its opponents on Thursday, with the reaffirmed support of its armed forces. Venezuelan General Vladimir Padrino Lopez gave a televised address, stating that President Nicolas Maduro was the country’s legitimate leader, while condemning opposition leader Juan Guaido’s unlawful attempt to take control.

On Thursday, US Secretary of State Mike Pompeo called on all countries in the region to reject Nicolas Maduro, and “align themselves with democracy.”

Guaido was put on the defensive with the military’s affirmation of loyalty to Maduro, after receiving vocal support from US President Donald Trump.

[A short explainer on the Venezuelan crisis.]

The opposition suffered further setbacks after Russian President Vladimir Putin called Maduro to express his support, emphasising that “destructive external interference is a gross violation of the fundamental norms of international law,” in a statement later shared in a press release by the Kremlin.

The support opposition leader Guiado received from the US goes beyond words, however. The US offered the Venezuelan opposition $20 million, while calling for an emergency gathering of the UN Security Council to be held on Saturday over the turmoil in Venezuela.

Maduro entered his second term this month, a move that was closely followed by the National Assembly’s rejection of his legitimacy. Following the Venezuelan Supreme Court’s affirmation of the president’s legitimacy, a group of National Guardsmen staged a failed coup attempt.

All in all, recent events are likely to exacerbate the country’s difficult conditions. Once an affluent oil-wealthy nation, Venezuela has been reduced to severe economic difficulty following a protracted economic war waged by the US against the country.

Following Trump’s recognition of Guaido’s presidency on Wednesday, Maduro cut ties with the US, ordering its diplomats to vacate the country within 72 hours. Pompeo responded to this by stating the US would not obey the order.

According to reporting by the New York Times, a senior American diplomat stated that “there were no plans to close the embassy.”

Maduro, spoke again on Thursday, urging the US to withdraw all diplomatic staff by the weekend.

“If there is any sense and rationality, I say to the State Department: You must follow the order,” he said.

The Venezuelan opposition were betting on the military’s desertion of Maduro, following protests in the country and US recognition of the self-declared candidate, particularly with the Trump administration's repeated statements that a ‘military option’ was not off the table for Venezuela.

Meanwhile, retired US air force general Douglas Fraser spoke out against the US involvement in Venezuela.

“I don’t see a good reason for the military to be employed in this situation,” said Fraser.

“It might be worthwhile to just understand what the implications and requirements would be,” he said.”

The US’s explicit and rapid involvement, however, may have the opposite effect, given the country’s history of interference and instigated coups in Latin America. Concerns over the US role in Venezuela were made clear as recently as 2017 when then CIA director Mike Pompeo commented that he was “hopeful that there can be a transition in Venezuela and we the CIA is doing its best to understand the dynamic there”.

The Venezuelan military, with its 515,000 active personnel, has established its stance in supporting Maduro, while openly stating their opposition to a violent clash.

“We’re here to avoid a clash between Venezuelans,” said Padrino Lopez in his address. “It’s not a civil war, a war among brothers, that will resolve Venezuelans’ problems.”

He went on to describe Guaido’s self-declaration of the presidency as “laughable”, calling him a pawn of right-wing factions in service to the US.

“It makes you want to laugh,” he said. “But I must alert the people of the danger this represents.”

Meanwhile, Guaido kept out of the public eye on Thursday, leading to speculation that the government could detain him soon.

Roberta S. Jacobson, former US assistant secretary of state, who worked on Latin American policy under Obama, described the situation as untenable in an interview with the New York Times.

“I don’t think the administration has thought through all of the consequences of taking action as quickly as it did in recognizing Guaido,” she said.

“Diplomats who back Mr. Guaido hoped that key members of the armed forces would switch sides. But Mr. Padrino said he was speaking for a unified command. He argued that the opposition had the “dark aim of sowing chaos and anarchy in our society,” said Jacobson.

Rocío San Miguel, a Venezuelan defence analyst speaking on behalf of Citizen Control, commented that it would seem the military has concluded that Maduro has the upper hand.

While the armed forces “aspire to a peaceful resolution” to the crisis, they will “stick with the most concrete power structure, pragmatically,” said San Miguel. 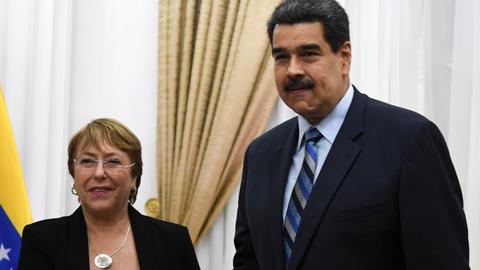