The swearing-in of the National Electoral Council by the Supreme Court promises to deepen the bitter political divide in Venezuela, which is burdened with a shattered economy despite holding with the world’s largest oil reserves.

It comes ahead of a key election this year when Venezuelans will be asked to elect a new congress, a new opposition-dominated body that is led by US-backed Juan Guaidó. It is the only branch of government out of Maduro’s control.

“As Venezuelans, we make our demand to the world for a free vote!” Guanipa added, calling Maduro’s government a dictatorship.

The unilateral appointments proved especially disheartening to some moderate opponents of Maduro who had been working in the past week to try to reach an accord on providing minimal guarantees for a free and fair vote.

Luis Vicente Leon, president of the Caracas-based Datanalisis polling firm, said the high court added two members from outside the ruling socialist party in an attempt to give the elections commission an appearance of balance. But, ultimately nothing changed, because the court’s unilateral action was not the product of a political negotiation that involved any participation by opposition leaders, he said.

Oil-exporting Venezuela was once among Latin America's wealthiest nations. But it has spiralled into an economic crisis, which critics blame on more than two decades of socialist rule launched by the late Hugo Chávez. Maduro was his hand-picked successor and has carried out the same polities.

Many hoped for a restart to Venezuela’s tumultuous political landscape when Guaidó in early 2019 rose to lead the opposition upon being named head of the National Assembly. He proclaimed presidential powers, accusing Maduro of “usurping” power by claiming victory in a presidential election widely considered fraudulent.

The United States and a coalition of more than 50 nations support Guaidó as Venezuela's interim president, but Maduro remains in power with backing from the military and international allies including Russia, China, Iran and Cuba.

Guaidó has threatened not to participate in any election that did not include strong guarantees of fairness. But he is recognized by international supporters as Venezuela's legitimate leader because of his elected position to the National Assembly, which he could potentially cede.

Guaidó said Friday that Maduro is putting obstacles in the path of resolving Venezuela’s crisis, but the opposition has not stopped fighting despite government lies.

“We haven’t given up our rights,” Guaidó said on Twitter. They’ve got the game locked up and they’ve already started hanging up their phones. Don’t be fooled by their distractions.” 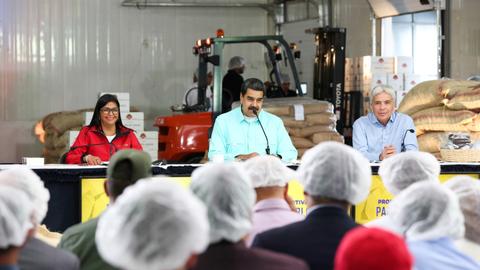