The vote comes despite President Donald Trump's repeated warnings that he will reject legislation that would end his national emergency declaration at border with Mexico.

The Republican-run Senate rejected President Donald Trump's declaration of a national emergency at the southwest border on Thursday, setting up a veto fight and dealing him a conspicuous rebuke as he tested how boldly he could ignore Congress in pursuit of his highest-profile goal.

The Senate voted 59-41 to cancel Trump's February proclamation of a border emergency, which he invoked to spend $3.6 billion more for border barriers than Congress had approved.

Twelve Republicans joined Democrats in defying Trump in a showdown many GOP senators had hoped to avoid because he commands die-hard loyalty from millions of conservative voters who could punish defecting lawmakers in next year's elections.

With the Democratic-controlled House's approval of the same resolution last month, Senate passage sends it to Trump.

He has shown no reluctance to casting his first veto to advance his campaign exhortation to "Build the Wall," and it seems certain Congress will lack the two-thirds majorities that would be needed to override him.

"I'll do a veto. It's not going to be overturned," Trump told reporters in the Oval Office. "It's a border security vote."

A big National Emergency vote today by The United States Senate on Border Security & the Wall (which is already under major construction). I am prepared to veto, if necessary. The Southern Border is a National Security and Humanitarian Nightmare, but it can be easily fixed!

Vice President Mike Pence met with Republican senators this week to try to tamp down support for the measure, with some Republicans worried that future Democratic presidents could usurp the power of Congress to fund the government and use the emergency declarations to fund their own pet programmes.

Pence told senators that Trump would back a second bill offered by Republican Senator Mike Lee, which would end future emergency declarations after 30 days unless Congress votes to extend them.

Lee said on Wednesday the White House had subsequently made clear his bill did "not have an immediate path forward."

He added he would vote on Thursday to end the emergency declaration.

"We're building a lot of wall, as you all know."

Billions of dollars at stake

At stake are billions of dollars in funding for a wall along the US-Mexico border that Trump is demanding but Congress has refused to fully provide.

The stalemate led to a 35-day partial government shutdown that ended in January.

Under the emergency declaration Trump signed on February 15, he would take money from other federal programmes to build the barrier he says is needed to curb illegal immigration and drug trafficking.

Democrats deny there is an emergency at the border, saying border crossings are at a four-decade low.

Court challenges have also been filed asserting it is Congress, not the president, that decides how taxpayer money is spent. 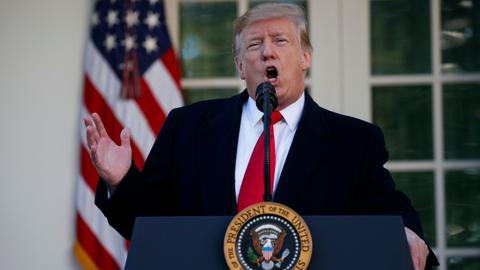