The Danish director set out to investigate the mysterious 1961 plane crash that killed the head of the UN in modern-day Zambia for his latest film but says he ended up uncovering something vastly more sinister.

A plot by white mercenaries to spread HIV in black South Africa via a phoney vaccination programme: it sounds like the stuff of pulp spy novels, but documentary-maker Mads Brugger is clear that this is one sensational conspiracy that actually happened.

Jones tells the filmmaker that the group undertook nefarious HIV research in the 1980s and 1990s as part of a white supremacist plot to devastate black communities with the virus.

"We were at war," Jones tells Brugger in the film. "Black people in South Africa were the enemy."

There is no evidence of the plot to spread HIV being successfully put into action.

But Brugger and his team tracked down medical clinics run by the group's now-dead leader Keith Maxwell in South Africa.

Maxwell claimed to be seeking a cure for HIV but had no medical training and spoke openly of his fascination with biological weapons, according to the filmmakers.

They met with a witness who says he saw Maxwell personally injecting black patients with supposed vaccines.

"What easier way to get a guinea pig than (when) you live in an apartheid system?" Jones says in the film.

"Black people have got no rights, they need medical treatment. There's a white 'philanthropist' coming in and saying, 'You know, I'll open up these clinics and I'll treat you.'

"And meantime (he was) actually the wolf in sheep's clothing."

Brugger said that "strategy papers" belonging to Maxwell fit "hand-in-glove" with Jones's claims about the plot.

"What Maxwell was writing about, planning for ... in itself constitutes a crime," Brugger said.

The allegations were denounced as irresponsible and medically dubious by some critics after the film's January premiere at the Sundance Film Festival, where Brugger won a top directing prize for the documentary.

Since then, he has toured the global festival circuit and defended his work ahead of its release by Magnolia Pictures from August 16 in a few dozen US theatres and online platforms, including Amazon and iTunes.

In the film, he initially set out to investigate theories that UN Secretary-General Dag Hammarskjold's plane was deliberately brought down in a crash that killed 16 people.

This prompted Brugger and his team to examine the group more closely.

They tracked down Jones, who claimed SAIMR had brought down the plane.

Brugger has since arranged a meeting between Jones and UN investigators compiling an enquiry report into the crash, a UN spokesman confirmed – something the director says demonstrates his witness's reliability.

"I do know that what (Jones) says is outrageous and sensational," Brugger said. "So far, what he has told us, what we were capable of corroborating, has checked out."

Many doubt SAIMR even existed on any substantial scale outside the warped mind of its "leader" Maxwell, a noted fantasist who dressed like an 18th-century British naval admiral.

A New York Times report suggested Jones initially denied any HIV research project existed, and only professed knowledge of it on camera after being fed information by filmmakers.

Brugger admitted to AFP that there "could have been examples of cross-contamination" because his team spent so much time with Jones.

"But I know for sure that the essential part of what he tells us is not something we fed him," Brugger said, adding that it is typical for whistleblowers to "open up and tell you more as time progresses."

And then there is the issue of whether it would have even been possible to deliberately spread HIV.

Medical experts say the technology was beyond the scope of all but a handful of government laboratories at the time.

Conspiracy theories about Western plots to weaponise AIDS in Africa were encouraged by the Soviet Union during the Cold War and can cause serious harm by turning people off medical treatment.

South Africa has extremely high HIV infection rates and a history of dangerous misinformation about its spread.

Brugger said he "thought hard and long" about the damage the vaccine claims could do, but insisted that "what Alexander Jones tells us needs to be published."

"If the response to this is that we are invigorating or revitalising conspiracy theories, I think that is in some sense absurd," he said. 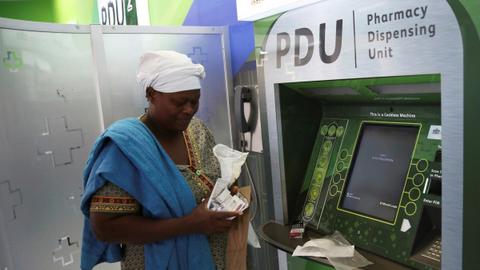