The National Library of Israel completes its collection of the Max Brod archive, including items such as notebooks and manuscripts from both Brod and his friend Franz Kafka.

Before his early death in 1924 at age 40 from tuberculosis, Franz Kafka had entrusted his estate to his friend and fellow author Max Brod. The Czech author wanted all his writings and letters to be burned posthumously.

But Brod decided against it, because, according to a statement by the National Library of Israel, “Kafka changed his mind several times regarding his wishes and Brod felt that not destroying the papers was what Kafka would have truly wanted,” as noted in a press release dated August 7, 2019.

And that’s how Kafka’s legacy was saved to be cherished by future generations. But it wouldn’t come to take its place among the Max Brod estate until the National Library of Israel finally completed its acquisition process.

“These materials will soon be digitised and made available online, allowing current and future scholars and fans of Brod and Kafka around the globe to freely access them,” he added.

A part of Kafka’s legacy –– most of his manuscripts –– are at the Bodleian Library at Oxford because most of his papers were transferred to his heirs who had outlived the Holocaust and had made a home in England.

A Jewish Czech himself, Brod left Nazi-occupied Czechoslovakia for British Mandatory Palestine in 1939, bringing suitcases of Kafka’s work with him. Until his death in Tel Aviv in 1968, Brod was responsible for translating and publishing his friend’s work.

Brod had bequeathed Kafka’s work to the National Library of Israel upon his death, asking his secretary Esther Hoffe to make sure the manuscripts, the letters and the notebooks got there, but she held on to them until her death in 2007.

In addition to not fulfilling Brod’s wishes, Hoffe also made money from the Kafka estate, eventually selling the manuscript of The Trial for $2 million in 1988. When she died, the National Library of Israel asked Hoffe’s daughter Eva to hand over the archive, but the two sides could not come to an agreement.

The National Library of Israel ended up suing and after legal proceedings in three Israeli courts –– including the Supreme Court –– won the right to the archive in 2016.

Since then, the National Library of Israel has been collecting the Kafka works and the Brod estate, from various locations around the world including Israel, Germany and Switzerland.

According to AFP, Hoffe lived with nearly a dozen cats and stored the papers partly in a disused refrigerator, along with 35 boxes of the Kafka/Brod collection. Hoffe died in 2018 and the part of the archive that was in her care was removed from her Tel Aviv apartment.

Other parts of the collection were found in an Israeli bank vault, in vaults at the headquarters of UBS bank in Zurich, as well from two Israeli black market sellers who tried to sell three suitcases of the Brod estate to German Literary Archives in Marbach and private collectors.

German police handed the stolen archives to the National Library of Israel following a Wiesbaden court ruling in May this year, in “an act of historical justice”, according to Israeli Ambassador Jeremy Issacharoff during the handover ceremony at his Berlin residence.

The documents, some 5,000 pages that were “part of Brod’s private archive and had been stolen” according to an Israeli embassy statement, included a postcard from Kafka sent to Brod in 1910.

UBS bank in Switzerland returned the papers it had in August. “We brought from Switzerland 60 files which coined original materials,” said Stefan Litt, the National Library’s archivist and curator of its humanities collection, thanking UBS for its “heartwarming” cooperation.

With the arrival of “hundreds of letters, manuscripts, journals, notebooks, sketches and more” –– handwritten by Brod and Kafka ––– from Switzerland to the National Library of Israel, the 12-year-long legal saga has come to an end. 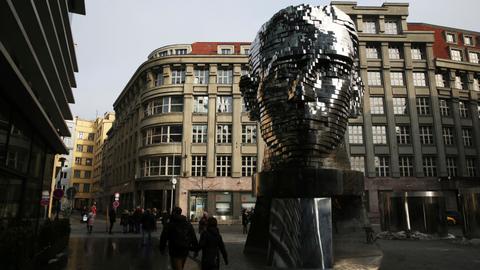