Jean-Luc Martinez, the president-director of the Louvre in Paris, describes the museum as a bridge between Asia, Africa and Europe. Louvre Abu Dhabi houses 600 artworks it has acquired, alongside 300 works on loan from 13 leading French institutions.

Abu Dhabi celebrated the opening of its Louvre museum on Thursday with a fireworks display, complemented with performance artists and colourful projections.

The United Arab Emirates capital is positioning itself as a city of cultural tourism with a display of hundreds of works that it hopes will draw visitors from around the world.

Envisioned by France's then-President Jacques Chirac as a means to fight extremism with art after the September 11 attacks, the museum is intended to be a bridge between East and West, with Buddhist, Christian, Islamic and Jewish artefacts.

Surrounded by water from three sides, Louvre Abu Dhabi houses 600 artworks it has acquired, alongside 300 works on loan from 13 leading French institutions, in its 23 permanent galleries. The artists range from Paul Gauguin and Vincent Van Gogh to Pablo Picasso and Cy Twombly.

The artwork on display offers a brief history of the world and its major religions — without shying away from Judaism in a country that does not recognise Israel.

In one exhibit, a Jewish funerary stele from France in 1250 sits next to a Tunisian Muslim's funerary steel and a Christian archbishop's stone epitaph from Tyre, Lebanon.

A painted French stone statue of Virgin and Child stands by a section of a Syrian Quran dating to around 1250, open to a page recounting the night during the holy month of Ramadan when Muslims believe the holy book was revealed to the Prophet Muhammad.

In a darkened room, a page from the Blue Quran, one of the oldest ever found, sits near a Gothic Bible, Buddhist sutras and a Torah from Yemen dating to 1498.

In a Middle East still torn by religious and sectarian conflict, whether between Sunni and Shiite or Israelis and the Palestinians, simply putting them side by side is a major statement.

However, the conservative mores of Abu Dhabi, the UAE capital that's more buttoned-up than freewheeling Dubai, can be seen in the relative absence of pieces depicting nudity.

Sheikh Mohammed, who also serves as the UAE's vice president and prime minister, said on Wednesday the museum represented the UAE's "cultural pride."

"The Louvre museum will represent the best of the East and the West and it's going to be a meeting point for those who love beauty and culture from all over the world," he said.

French President Emmanuel Macron was the guest of honour for the inauguration of the museum on Wednesday along with other heads of state.

Abu Dhabi officials have not disclosed how much it cost to build the museum.

What is known is that Abu Dhabi agreed to pay France $525 million for the use of the "Louvre" name for the next 30 years and six months, plus another $750 million to hire French managers to oversee the 300 loaned works of art.

A centre at Paris' Louvre now bears the name of the late UAE President Sheikh Zayed bin Sultan Al Nahyan, which was also part of the deal.

During construction, the project faced intense criticism over labour conditions, as workers toiled for long hours in the brutal heat for low pay. A worker was killed in an accident in 2015, while another died of "natural causes" in 2016, according to Abu Dhabi authorities.

Hundreds working on projects on the island, including the Louvre, were deported or lost their work visas for launching strikes over their conditions, according to a 2015 Human Rights Watch report. Labour strikes are illegal in the UAE.

Those labourers help build the modernist museum, which sits under a honeycombed dome of eight layers of Arab-style geometric shapes.

It draws the lapping waters of the Persian Gulf into its outer corridors, allowing individual beams of light that pass through the roof to strike the surface and cast dancing reflections across the white walls. After sundown, light filters out of the exterior dome, evoking a starry night.

The museum opens to the public on Saturday (November 11). 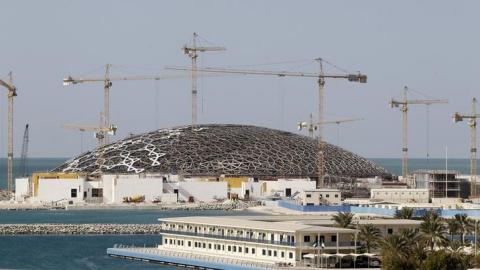 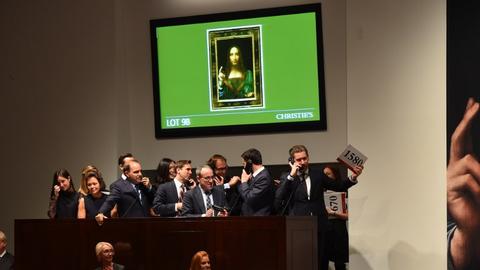