The film "20 Days In Mariupol" offers a behind-the-scenes look at how Director Mstyslav Chernov risked his life to chronicle a Russian direct hit on a maternity hospital, which provoked outrage around the world.

Three new documentaries from Ukrainian filmmakers highlighting the carnage wrought on their country by Russian aggression - and the insidious effects of Kremlin propaganda - premiere at the Sundance Film Festival this week.

"20 Days In Mariupol," which screened on Friday night, portrays in harrowing detail the arrival of war last year to a city that became one of the invasion's bloodiest battle sites, all captured by video journalists under siege.

And "Iron Butterflies," premiering on Sunday, chronicles the 2014 downing of Malaysia Airlines Flight 17 by Russian-armed separatists in eastern Ukraine, and its foreshadowing of today's larger conflict.

Director Mstyslav Chernov, a journalist who filmed the key port city of Mariupol as Russian troops advanced in February and March 2021, said he hopes to release his footage as a documentary "hits deeper" and "harder" with audiences than brief newsreel clips can.

"It really gives an insight to not only fuller stories of people who are there, but also to how big scale the story is," he told AFP.

The film recounts how Chernov and his team desperately tried to escape the city in order to transmit their shocking footage, even as Russian officials tried to dismiss the horrific incident as a hoax assembled using Ukrainian "actors."

Mariupol "was the first insight of how different Russia's narrative about this war is to reality," said Chernov.

Russian officials "were saying that they're not targeting civilians."

"You will see in the film me keep asking people, 'Russian Federation is not targeting civilians?' And you will see people reply, 'Well, they are.'"

Moscow's weaponization of misinformation is also central to "Iron Butterflies," which takes its name from the shrapnel within the Russian-made BUK missile that struck passenger plane MH17 in 2014, killing 298 people.

The movie combines newsreel and social media footage with intercepted military audio, to show how the Russian response went from claiming separatists had downed a Ukrainian military aircraft, to blaming Kiev for the civilian deaths.

It also contrasts the findings of an exhaustive international probe into the incident, with Russia's claim of another hoax.

The film underlines how those convicted of murder in absentia by a Dutch tribunal at The Hague are highly unlikely to ever serve time in prison.

A third film "Klondike," about a family living on the Russia-Ukraine border at the outbreak of violence in 2014, will receive a special encore at the high-profile festival in Utah, after winning Sundance's world cinema directing award last year.

Liubyi said the strong Ukrainian showing can only boost the profile of his country's film industry overseas, but warned "the much, much harder question is how to achieve something right here and right now for the country, for defence."

The director hopes to use the publicity from Sundance to crowdfund a reconnaissance drone for filmmaker friends currently serving in the Ukrainian army.

"I would like to use this moment to say as a Ukrainian citizen that we are really thankful for all the international community for helping us to defend (our country)," he said.

"But if you are asking 'Is it enough weapons?' Probably, unfortunately, it is still not enough."

He spoke to AFP as top Ukrainian officials on Saturday slammed allies' "indecision," after Germany refused to supply tanks to bolster Kiev in the nearly year-long war.

Liubyi takes his film to the Berlin film festival next month.

"For sure, international audiences get more and more tired from this topic," he said.

"It's hard to keep this fire, this interest... (but) this fight is about our existence."

READ MORE: One woman’s story: Hive, the real-life story of a woman in post-war Kosovo 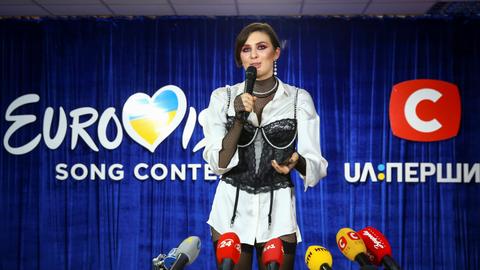 Ukraine pulls out of Eurovision contest after Russia row