At least 200 people have been injured in fresh clashes in the Shopian district of Indian-administered Kashmir, with pro-independence leaders reportedly refusing to meet an Indian Government delegation.

Violence has broken out in the Shopian district of Indian-administered Kashmir, with at least 200 people being injured after pro-independence protesters clashed with security forces.

The clashes broke out after police tried to prevent the protesters from marching to a public square in the town of Tral.

The latest violence comes as an Indian all-party delegation has travelled to the region to meet with leaders of the pro-Kashmiri independence All Party Hurriyat Conference to calm the situation, with the leaders apparently refusing to meet with the delegation.

It follows the death of 24-year old Basit Ahmed Ahanger, who was killed yesterday in the Qazigund area of South Kashmir after being wounded by pellets fired from a gun.

The current wave of unrest in Kashmir began with the killing of the leader of the military wing of the pro-independence Hizb-ul-Mujahideen group, Burhan Wani, on July 8.

There have been sporadic outbreaks of violence in Kashmir ever since the partition of India under the British Empire led to the division of the region between India and Pakistan.

Indian-administered Kashmir is predominantly populated by Muslims and there is a strong independence movement in the area aligned with Pakistan that seeks independence of the territory from India. 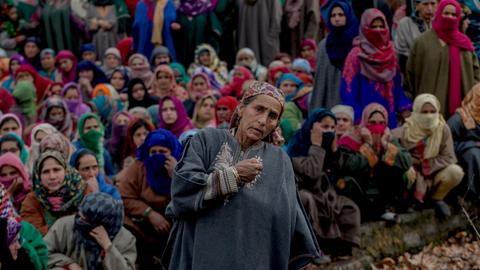 No one killed three civilians in Kashmir