Authorities raise forecast for greater Sydney region to catastrophic fire danger for Tuesday, the first time the city has been rated at that level since new fire danger ratings were introduced in 2009.

Authorities in Australia's Queensland and New South Wales states on Monday declared a state of emergency as the country's eastern region prepared for "catastrophic" fire conditions.

Fires in northern New South Wales (NSW) and Queensland over the weekend killed three people and destroyed more than 150 homes.

While Australia's most populous city Sydney avoided the worst of the weekend conditions, temperatures are set to soar to more than 34 degrees Celsius (93 degrees Fahrenheit), with strong, dry winds.

Authorities raised the forecast for greater Sydney region to catastrophic fire danger for Tuesday, the first time the city has been rated at that level since new fire danger ratings were introduced in 2009.

"Tomorrow is about protecting life, protecting property and ensuring everybody is safe as possible," NSW Premier Gladys Berejiklian told reporters in Sydney.

Home to more than five million people, Sydney is ringed by large areas of bushland, much of which remains tinder-dry following almost no rain across the country's east coast in recent months.

'Relocate while things are calm'

Authorities warned locals in areas deemed at the greatest risk to evacuate.

"Relocate while things are calm without the pressure or anxiety of fires bearing down the back door," said NSW Rural Fire Service (RFS) Commissioner Shane Fitzsimmons.

Fitzsimmons warned that fires can begin up to 20km ahead of established fires.

Authorities stressed that even fireproofed homes will not be able to withstand catastrophic conditions, which Fitzsimmons described as "when lives are lost, it's where people die".

There are 18 fires burning in NSW, two of which are deemed out of control by authorities.

Fitzsimmons said an additional 400 firefighters on 50 trucks are heading to NSW from the neighbouring state of Victoria to assist local authorities.

Bushfires are a common and deadly threat in Australia’s hot, dry summers.

In 2009, Australia's worst bushfires on record destroyed thousands of homes in Victoria, killing 173 people and injuring 414 on a day the media dubbed "Black Saturday". 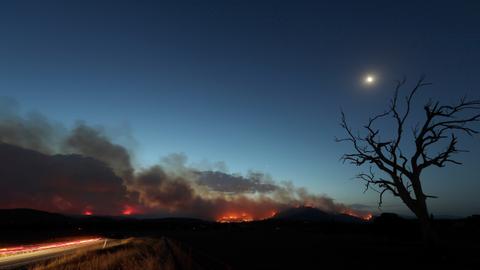