Eyewitnesses said all but seven or eight of the victims were schoolgirls going home after finishing studies.

Explosions caused by a car bomb and mortars outside a school in the Afghan capital Kabul have killed at least 58 people and wounded over 150, mostly female students, officials said, in an attack President Ashraf Ghani blamed on Taliban insurgents.

A senior security official told Reuters on condition of anonymity that most of the casualties were students coming out of the Sayed ul Shuhada school, and many were badly wounded in hospital.

"I saw many bloodied bodies in dust and smoke, while some of the wounded were screaming in pain," Reza, who escaped the blast, told AFP, adding that most of the victims were teenaged female students who had just left the school.

"I saw a woman checking the bodies and calling for her daughter. She then found her daughter's blood stained purse after which she fainted and fell to the ground."

Many victims were young pupils between 11 and 15 years old.

An eyewitness told Reuters all but seven or eight of the victims were schoolgirls going home after finishing studies.

The blast took place in Shia majority neighbourhood of Dasht-e-Barchi district that has frequently been attacked by Daesh terrorists over the years.

The Taliban condemned the attack and denied any responsibility.

The massacre came as residents were out for shopping ahead of Eid al Fitr next week that marks the end of Ramadan, the Muslim holy month of fasting.

I personally witnessed at least 30 dead bodies in Jinah Hospital in west of #Kabul, fallowing the deadly blast on school students in Kabul. #Kabulblast pic.twitter.com/JDp2BXspum

Residents in the area said the explosion was deafening.

One, Naser Rahimi, told The Associated Press he also heard three separate explosions, although there was no official confirmation of multiple blasts.

Rahimi also said he believed that the sheer power of the explosion meant the death toll would almost certainly climb.

"A car bomb blast happened first, and then two more explosions occurred near the girls school in Kabul," said TOLOnews, quoting a schoolteacher, who added that the majority of victims are girls.

#KabulBlast -Footage shows people with private vehicles are rushing victims of today's blasts in PD13 of Kabul to a public hospital in Dasht-e-Barchi of the city.#ArianaNews #Afghanistan pic.twitter.com/nYl6L7NWfV

Ambulances were rushing to evacuate wounded from the scene of the blast.

He implored residents to cooperate and allow ambulances free access to the site.

At one nearby hospital, Associated Press journalists saw at least 20 dead bodies lined up in hallways and rooms, with dozens of wounded people and families of victims pressing through the facility.

Outside the Muhammad Ali Jinnah Hospital, dozens of people lined up to donate blood, while family members checked casualty posted lists on the walls.

A while after wounded bodies have been taken to hospitals, people (youth) line up in a hospital to donate blood for wounded (victims) of today's horrific attack (bomb blast) which took place today at around 04:30 p.m at a school in west Kabul.#Kabulblast #carnage pic.twitter.com/WCt0zDZKRu

While no one has claimed responsibility for the bombing, previous brutal attacks in the same neighbourhood have been claimed by the Afghan Daesh affiliate.

Washington blamed Daesh for a vicious attack last year in a maternity hospital in the same area that killed pregnant women and newborn babies.

Taliban spokesman Zabihullah Mujahid told reporters in a message that only the Daesh group could be responsible for such a heinous crime.

The Taliban and the Afghan government have traded accusations over a series of targeted killings of civil society workers, journalists and Afghan professionals.

On Saturday, President Ashraf Ghan blamed Taliban for the blast.

"This savage group (Taliban) does not have the power to confront security forces on the battlefield, and instead targets with brutality and barbarism public facilities and the girls' school," he said in a statement.

While Daesh has taken responsibility for some of the killings in the area, many have gone unclaimed.

Even as the Daesh has been degraded in Afghanistan, according to government and US officials, it has stepped-up its attacks particularly against Shia Muslims and women workers.

#AFG “Initial assessment shows the attack could have been caused by IDF( indirect fire) outside a girls school in PD13 in Kabul city.”, Multiple sources in Kabul police, a local CID officer in PD13 and a school official tells me. pic.twitter.com/5e3co9FtjQ

The attack comes days after the remaining 2,500 to 3,500 American troops officially began leaving the country.

They will be out by September 11 at the latest.

The pullout comes amid a resurgent Taliban, who control or hold sway over half of Afghanistan.

The top US military officer said on Sunday that Afghan government forces face an uncertain future and possibly some "bad possible outcomes" against Taliban insurgents as the withdrawal accelerates in the coming weeks. 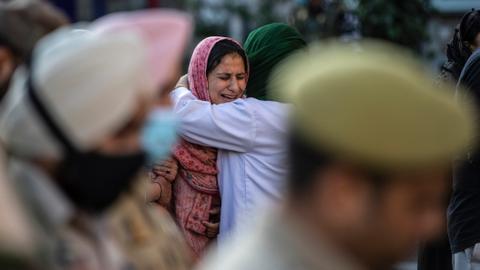