The laws, elements of which were first adopted in 2014 and which have been rolled out in phases since then, will be fully implemented from next week, the prime minister's office said in a statement on Saturday.

Brunei is a Muslim-majority former British protectorate with a population of around 400,000.

The laws, elements of which were first adopted in 2014 and which have been rolled out in phases since then, will be fully implemented from April 3, the prime minister's office said in a statement on Saturday.

The statement said that Brunei "has always been practising a dual legal system, one that is based on the Syariah Law [Islamic law] and the other on Common Law."

"The Syariah Law, apart from criminalising and deterring acts that are against the teachings of Islam, it also aims to educate, respect and protect the legitimate rights of all individuals, society or nationality of any faiths and race," the statement said.

Under the revision to the legal code, "both systems will continue to run in parallel to maintain peace and order and preserve religion, life, family and individuals regardless of gender, nationality, race and faith," the statement said.

The sale of alcohol is banned and evangelism by other religions is forbidden.

The country does not hold elections, but any discontent is assuaged with generous government polices including zero taxes, subsidised housing, and free healthcare and education.

Sultan Hassanal Bolkiah, 72, is the world's second-longest reigning monarch and is prime minister of the oil-rich country. He ranks as one of the world's wealthiest people.

Criticism of the reforms

The expected implementation of the stricter Islamic laws has drawn some criticism. Among those who have raised their concerns with Brunei are politicians in Europe and the United States.

"Stoning people to death for homosexuality or adultery is appalling and immoral," former US vice president Joe Biden said in a Twitter post on Friday. "There is no excuse - not culture, not tradition - for this kind of hate and inhumanity."

Amnesty International on Wednesday criticised the changes to the penal code.

"To legalise such cruel and inhuman penalties is appalling of itself," said Rachel Chhoa-Howard, Brunei researcher at Amnesty International.

"Brunei must immediately halt its plans to implement these vicious punishments and revise its penal code in compliance with its human rights obligations," Chhoa-Howard said. "The international community must urgently condemn Brunei's move to put these cruel penalties into practice."

No vocal opposition to law in Brunei

There has been no vocal opposition to the law in Brunei, where Bolkiah rules as head of state with full executive authority. Public criticism of his policies is extremely rare in Brunei.

The sultan, who has reigned since 1967, has said Islamic law is a form of "special guidance" from God and would be "part of the great history" of Brunei.

Under secular laws, Brunei already prescribes caning as a penalty for crimes including immigration offenses, for which convicts can be flogged with a rattan cane.

Brunei's sultan instituted changes to the penal code in 2014 to bolster the influence of Islam in the tiny, oil-rich monarchy, which has long been known for conservative policies such as banning the public sale of liquor. 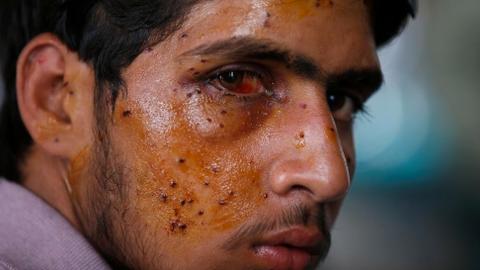