At least four people were killed and 15 others wounded in the explosion outside the Science College in Quetta, the capital of Balochistan province.

A roadside bomb has exploded outside a college in southwestern Pakistan, killing four people and wounding at least 15, mostly passers-by.

The attack happened outside the Science College in Quetta, the capital of Balochistan province, according to Fida Hussain, a senior police officer said on Thursday.

Baqi Hussain, a rescuer, said that they transported three bodies and about a dozen wounded to a hospital, where one of the seriously wounded died.

The college was closed at the time of the attack due to the winter break and none of the teachers or students were among the victims.

No one immediately claimed responsibility for the bombing but previous such attacks have been blamed on militants and separatists.

Balochistan is the scene of a long-running revolt by Baluch secessionist groups that for decades have staged bombings and shooting attacks on civilians and security forces to press their demands for independence.

The Pakistani Taliban and Daesh also have a presence in Balochistan.

Islamabad insists that Pakistani forces have quelled the uprising in Balochistan but violence has continued there. 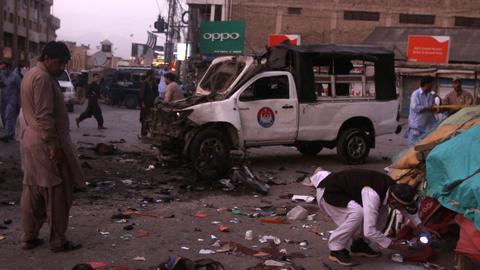