The president of the Philippines imposed martial law on the island in May to deal with the Marawi siege, which troops quelled in October.

Philippine President Rodrigo Duterte asked Congress on Monday to extend martial law in the volatile southern island of Mindanao until the end of next year to quell an insurgency.

In a letter to lawmakers released by his office, Duterte said extending martial law was necessary in Mindanao to contain an ongoing rebellion by Daesh supporters, as well as a rising threat from communist guerrillas.

"I ask the Congress of the Philippines to further extend the proclamation of Martial Law and the suspension of the privilege of the writ of habeas corpus in the whole of Mindanao for a period of one year from 01 January 2018," the letter said.

Duterte initially imposed military rule across Mindanao, which covers the southern third of the country and is home to about 20 million people, in May to quell an uprising by Daesh supporters in Marawi city.

Hundreds of gunmen rampaged through Marawi in what authorities said was part of a campaign to establish a Southeast Asian caliphate for Daesh.

A US- and Chinese-backed military campaign took five months to defeat the militants, with the conflict claiming more than 1,100 lives and leaving large parts of Marawi in ruins.

Although Duterte declared in October that Marawi had been "liberated" and military chiefs said most militant leaders had been killed, authorities have continued to warn that others who escaped are regrouping and recruiting in Mindanao.

The initial period of martial law was limited by the constitution to 60 days. But lawmakers in July endorsed an extension until the end of this year.

Martial law is an extremely sensitive issue in the Philippines, after dictator Ferdinand Marcos used military rule as a key weapon in holding onto power a generation ago.

Duterte has repeatedly said he may impose martial law across the entire nation.

Rights groups and other critics warn Duterte is destroying democracy in the Philippines with strongman rule and a war on drugs that has claimed thousands of lives.

But many Filipinos continue to support Duterte, believing tough tactics are needed to solve deep-rooted problems such as the decades-long conflicts with militants and communists.

Duterte enjoys overwhelming support in both houses of Congress. 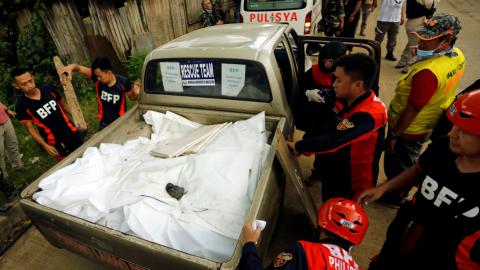