With almost all the votes counted in Saturday's poll, a coalition of East Timor's opposition parties was underway to win an election held after months of deadlock, getting 49.59 percent of the total votes.

A coalition of East Timor's opposition parties, including a party led by independence hero Xanana Gusmao, was heading for victory on Sunday in an election held after months of deadlock in the tiny Southeast Asian nation's parliament.

With more than 99 percent of votes counted in Saturday's poll, the Alliance of Change for Progress (AMP) was leading with 49.59 percent of the total, according to the latest count by the state election administration.

The AMP, a coalition of Gusmao's National Congress for Timorese Reconstruction (CNRT) and two other parties, was on track to secure 34 of the 65 seats in parliament.

The Fretilin party of outgoing Prime Minister Mari Alkatiri was on 34.18 percent of votes.

Official results are not due until May 27, but a senior AMP official said it looked certain that it had won.

"This victory is not a gift, but it is a mandate that people give us to work for them," said the official, declining to be named and urging supporters not to celebrate excessively.

Fretilin officials could not immediately be reached for comment.

The election campaign had been marred by sporadic violence, though East Timor has been largely peaceful in recent years following recurrent bouts of political instability that it suffered after independence from Indonesia in 2002.

The 2017 parliamentary election produced no clear winner, with the Fretilin party winning just 0.2 per cent more votes than CNRT, and forming a minority government.

Former president and prime minister Gusmao could not immediately be reached on Sunday, but after casting his vote a day earlier had said he expected the election to end the political deadlock.

Asia's youngest democracy has struggled to alleviate poverty, stamp out corruption and develop its rich oil and gas resources. The energy sector accounted for around 60 percent of GDP in 2014 and more than 90 percent of government revenue.

Candidates in the election had campaigned on promises to develop education and healthcare and boost the agriculture and tourism sectors.

More than 700,000 East Timorese were registered to vote in the country, which has a land area slightly smaller than Hawaii and is home to 1.2 million people. 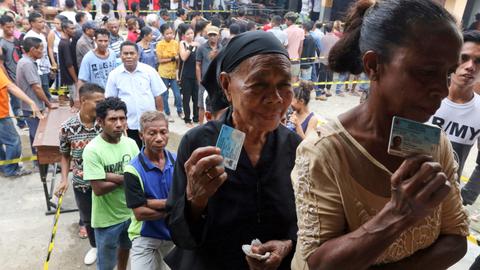