Georgians go to polls to elect a new parliament in a country seen as a rare example of democracy among ex-Soviet countries.

Georgian Prime Minister Giorgi Gakharia has promised free and fair polls and encouraged citizens to vote in the elections which "will define Georgia's further successful development".

"We can show the world another example by holding exemplary elections – free, open, democratic, and transparent," he said in a statement.

Nestled between the Caucasus mountains and the Black Sea, Georgia is seen as a rare example of a democracy among ex-Soviet countries.

But elections in the country of nearly four million people regularly spark mass protests, with only one orderly transition of power, after a parliamentary vote in 2012.

Two colourful personalities dominate politics in the tiny Caucasus country – the former president Mikheil Saakashvili, who lives in exile in Ukraine, and the billionaire and ex-prime minister Bidzina Ivanishvili.

Dozens of voters queued in an autumn sunshine outside a polling station in downtown Tbilisi's Vake neighbourhood minutes after polls opened at 0400GMT.

"I am very optimistic, Georgia will today get rid of Ivanishvili and his corrupt government," plumber Lasha Guruli told AFP after having cast his ballot.

Another voter, mathematician Lamara Lagvilava, said she had voted for the opposition. "Georgia can't stand any longer the incompetence of the Georgian Dream government," she added.

On Thursday, tens of thousands of Saakashvili supporters staged a rally in Tbilisi's central square, cheering as Saakashvili addressed them by video link.

The charismatic reformer was forced to flee Georgia at the end of his second term in 2013, fearing arrest after prosecutors accused him of abusing power – charges he has denied, insisting they were politically motivated.

In power since 2012, Georgian Dream's popularity has plummeted due to discontent over its failure to address economic stagnation and perceived backsliding on its commitment to democracy.

Critics accuse Ivanishvili – who is widely seen to be calling the shots in Georgia – of persecuting political opponents and creating a corrupt system in which private interests permeate politics.

"An oligarch who owns some 40 percent of Georgia's national wealth has appropriated the country and is ruling it as his fiefdom," Saakashvili told AFP in an interview.

"How could an election be seen as free and fair if the main opposition leader is robbed of a possibility to return to the country and campaign?" he said.

Western capitals have accused the Georgian Dream-led government of mounting a political witch-hunt.

Nearly all of Georgia's opposition parties, including Saakashvili's UNM, held talks on forming a coalition government if elected.

Today, we vote for our future. We vote for democracy, for our European path, for the next generations.

Both the ruling party and the opposition have said they are sure to win, but analysts believe the outcome is uncertain, with the opposition enjoying only a narrow lead.

Due to Georgia's complex election rules, the final make-up of the 150-seat parliament may only become clear by late November.

Voting, which ends at 1600GMT, will be monitored by international observers from the Organization for Security and Cooperation in Europe.

Exit polls are set to be published when polls close and the release of preliminary results is expected to begin after midnight (2000GMT). 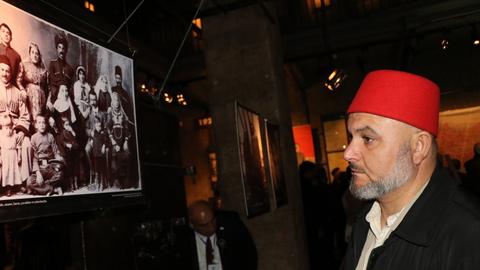 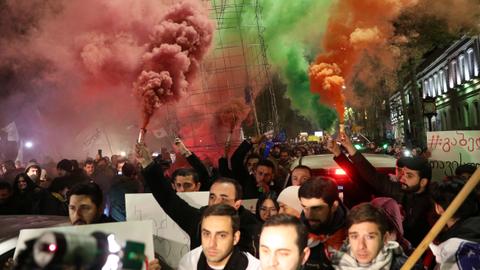