John Lee, a 64-year-old former deputy commissioner of police who was promoted to the global financial hub's number two role in 2021, says he is awaiting Beijing's approval to stand in the election.

Hong Kong's second most senior leader, Chief Secretary John Lee, has resigned to run in a leadership election in May, after Chief Executive Carrie Lam said she will not seek a second five-year term.

Lee said on Wednesday he was awaiting Beijing's approval for him to stand in the leadership election.

Lee, 64, a former deputy commissioner of police, was promoted to the global financial hub's number two role in 2021.

Some political analysts said the move signalled Beijing's priorities for Hong Kong were related to security rather than the economy or finance.

Lee was among Chinese and Hong Kong officials sanctioned by the United States in June 2020 for what Washington described as their role in curbing Hong Kong's freedoms after Beijing's imposition of a sweeping national security law.

City leaders are selected by a small election committee stacked with Beijing loyalists so whoever becomes the next leader of the former British colony will do so with Beijing's tacit approval.

Hong Kong returned from British to Chinese rule in 1997 with the guarantee of wide-ranging freedoms, including an independent judiciary and right to public assembly, for at least 50 years.

Hong Kong and Chinese authorities deny individual rights are being eroded and say the security legislation was needed to restore stability after the prolonged unrest.

Only on Wednesday, Hong Kong police arrested six activists for suspected sedition in connection with what the police called "causing nuisance" at court hearings in December and January.

HKCTU was once Hong Kong's largest independent trade union, but was among dozens of groups forced to disband after Beijing imposed the controversial national security law in 2020.

The law punishes crimes of secession, subversion, terrorism and collusion with foreign forces with up to life in prison, and has been criticised by Western governments as a tool to suppress dissent and curb freedoms.

In pictures: Violence intensifies as protests continue in Hong Kong 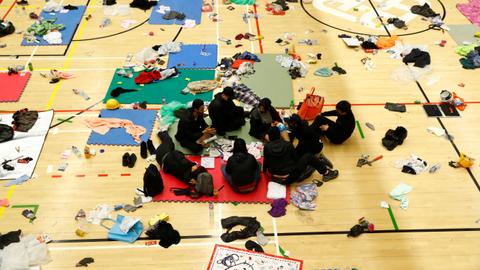