The Maldives, an Indian Ocean archipelago, is in political turmoil after President Abdulla Yameen imposed a state of emergency and arrested top judges in what the UN has called an “all-out assault on democracy.”

When the Maldives Supreme Court last week announced a ruling dropping charges against a group of political opponents, hundreds of people took to the capital Male’s streets to celebrate.

“They were in a celebratory mood, there was music,” local journalist M Junayd, told TRT World.

But the jubilation was short-lived. Security forces took to the streets, and opposition protesters demanding the government comply with the Supreme Court order were tear-gassed.

The next few days could be critical. A senior UN official briefed the Security Council on Thursday.

"The situation in the Maldives is tense and may deteriorate even further," UN Assistant Secretary-General Miroslav Jenca told the top UN body.

Is this the first time there's trouble in paradise?

The Maldives were incorporated into the European colonisation of the region, with Portugal’s occupation of the islands in the 16th century. Dutch tutelage followed, and then the British. The islands were formalised as an internally self-governing British protectorate in 1887, which received its first democratic constitution in 1932.

But instability has been the norm rather than the exception in much of the history of the islands, best known as a tourist paradise.

The country finally instituted a multiparty democracy 10 years ago, but with Yameen's election, pluralism began to erode.

Yameen, from the Progressive Party of Maldives, was elected president in 2013. Since then, he has cracked down on civil liberties, imprisoning or forcing into exile nearly every politician who opposes him.

Crowds at the rally calling on government to enforce the Supreme Court ruling tonight. #Maldives pic.twitter.com/WBwxy9js69

Following are the key points in the current crisis; how the Maldives got to where it is today, and where it might go.

Before that, the Indian Ocean nation was ruled with an iron fist for 30 years by Maumoon Abdul Gayoom, the incumbent president’s estranged half-brother.

While Gayoom survived three coup attempts, he was also kept in power by a system that silenced critics. He led a nation where corruption, crime and drug use was rife.

In 2008, the archipelago got its first democratically elected president, Mohamed Nasheed — then the leader of the Maldivian Democratic Party (MDP). Nasheed was ousted in a bloodless coup in 2012 and was then sentenced to 13 years in prison for ordering the arrest of Judge Abdulla Mohamed in 2015 over alleged corruption.

Since then, democracy in the Maldives has been in a constant state of crisis.

During his presidential tenure, Yameen has curbed freedom of speech and assembly, with heavy fines imposed on journalists and social media users allegedly found guilty of defamation.

Former strongman Gayoom now stands with the opposition —once his rivals — a move that has not gone unnoticed in the fluid political map of the tropical islands.

What is happening now?

The 15-day state of emergency imposed by Yameen on February 5 gives security forces the power to make arrests, and search and seize property. It also restricts freedom of assembly and takes away the power to impeach the president.

“These are rights that are very important in a democracy. It's very easy for an autocratic leader or government to encroach upon them,” Junayd told TRT World.

“The Maldivian government must uphold its obligations under international human rights law and not use measures adopted under the state of emergency as a justification for further human rights violations," human rights watchdog Amnesty International said.

The Yameen administration saw the Supreme Court's original decision to drop charges against the opposition as a loss of judicial backing.

The events that have transpired since then show an attempt to govern through the use or implied use of force.

Dissent from within the security apparatus has been crushed. Yameen fired two police chiefs in the three days since the state of emergency was declared.

The clampdown on the media also tightened. On Friday, Raajje TV, a pro-opposition television network in the Maldives shut down following threats to its staff.

Does this change Maldives’ relationship with other countries?

Home to 400,000 people, the Maldives has been the object of a region-wide tussle over influence between India — with which it has long-standing political and security ties — and China, which has offered technical and financial assistance to build infrastructure.

The archipelago assumed greater importance since China began building political and economic ties in line with it’s so-called ‘String Of Pearls’ strategy to create a chain of ports in the Indian Ocean.

The Maldives has been gravitating towards China in recent years.

In addition to China, it sent special envoys to nations it deems friendly, such as Pakistan and Saudi Arabia, to brief them on the political situation in a move that seemed to bolster ties.

“The international community should respect the Maldives' sovereignty and territorial integrity and play a constructive role to facilitate the talks between all related sides,” China’s foreign ministry spokesman Geng Shuang said.

What do Maldivians want?

A move beyond the status quo.

Many Maldivians are disenchanted. They see the current crisis as at least a slide into authoritarianism if not an outright dictatorship.

“A lot of people are frustrated with the politics and they think it is impossible to change,” said Junayd.

I hope the international community will finally stop describing #Maldives as a country 'sliding into authoritarianism' and acknowledge it for what it is: a full-blown dictatorship. @AkhileshIFS @USAmbKeshap @JamesDauris

Critics of the current situation advocate in favour of independent, nonpartisan and unbiased institutions to monitor the government.

They say the political system is currently not strong enough to withstand attacks on democracy.

The separation of powers and rule of law are weak. And the government seems incapable of returning to the people its earnings on the islands' main source of revenue — tourism. Poverty remains high in paradise.

“So people are not empowered, no unions and a lot of them depend on government jobs,” Azim Zahir, a PhD student at the University of Western Australia who studies the Maldives, told TRT World.

"A number of them also depend on jobs provided by big businesses, which over time are connected to one political party or the other."

How is this likely to pan out?

The current crisis has prompted the most vocal opposition since Yameen become president in 2013. If unchecked, the situation could become a real threat to his rule.

Disappointment is palpable around those who voted for change when he was elected. Even former allies are abandoning the president.

“He has taken a lot of high-risk measures in order to maintain his own power and, in the process, he has created a lot of enemies,” Zahir told TRT World.

Despite his increasing isolation, Yameen seems determined, at least for now, to cling to power.

“He has suspended the judiciary, he has ensured the parliament will still be in recess, and stopped parliamentarians from using security forces from getting inside the parliament building.

He enforced the state of emergency followed by a brazen attack on the Supreme Court by security forces who went into the chambers of the justices to arrest them," said Junayd.

“Looking at all that, I think that is the way he plans to do it.” 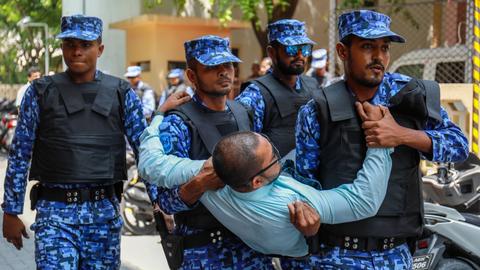