Indian police have arrested the co-founder of a top fact-checking website who has been a vocal critic of Prime Minister Narendra Modi's Hindu nationalist government, his colleague said.

Mohammed Zubair was arrested in the capital New Delhi on Monday after being called in for questioning in an earlier case, said Pratik Sinha, who runs the Alt-News website together with Zubair.

Sinha said in a post on Twitter that his colleague was arrested illegally and without warning and was being held by police in Delhi.

Zubair has been one of the fiercest critics of Modi's ruling Hindu nationalist Bharatiya Janata Party (BJP) and has frequently called out hate speech by Hindu groups on the internet.

He has faced several legal cases over the years that his supporters dismiss as politically motivated attempts to silence a critic.

Some local media reports linked Zubair's arrest on Monday to the recent controversy over incendiary remarks about Prophet Muhammad made by two BJP officials, which sparked widespread global protests and outrage from the Islamic world.

Many Hindu nationalists in the last few weeks have drawn attention to past comments on social media made by Zubair and other Modi critics and demanded that he be prosecuted for hurting their religious feelings.

Most government critics however see Zubair's arrest as part of a crackdown on free speech and rights activists that India has seen since Modi's ascent to power in May 2014.

On Saturday, police detained activist Teesta Setalvad who hails from Modi's western home state of Gujarat. Setalvad has been campaigning to have Modi declared complicit in deadly sectarian riots 20 years ago in which thousands of Muslims were killed.

Protests were held in several Indian cities on Monday with rights activists and free-speech organisations demanding Setalvad's release and describing her detention as "politics of vengeance".

Delhi Police got the wrong guy. They wanted to arrest Hrishikesh Mukherjee but instead arrested @zoo_bear for posting a screenshot of his film "Kissi Se Na Kehna" released in 1983. 😂😂😂

What a Joke entire state machinery & Delhi Police has been turned into! #IStandWithZubair pic.twitter.com/NjdKgRgU8b

Reuters' partner ANI reported, citing Delhi Police sources, that Zubair was arrested based on a complaint from a Twitter account that said he insulted Hindus in a 2018 post commenting on the renaming of a hotel after the Hindu monkey god Hanuman.

"The Prime Minister of India talks about the horrors of Emergency while he has unleashed one in India. Journalist Zubair who routinely busted fake news, exposed the hate machinery in India has just been arrested," said Rana Ayyub, another Muslim journalist who often invites the wrath of Hindu hardliners.

"The country is punishing those who reported, documented the decline."

Ten human rights organisations said on World Press Freedom Day last month that Indian authorities were increasingly picking on journalists and online critics for their criticism of government policies and practices, including by prosecuting them under counter-terrorism and sedition laws.

Arrest of @zoo_bear is highly condemnable. He’s been arrested with no notice & in some unknown FIR. Total violation of due process. @DelhiPolice does nothing about anti-Muslim genocidal slogans but acts swiftly against “crime” of reporting hate speech & countering misinformation 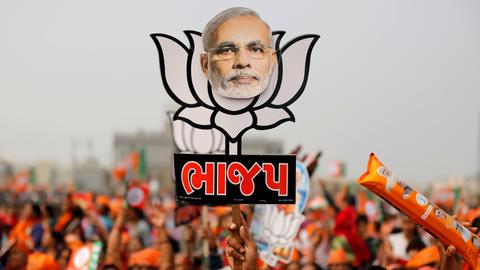 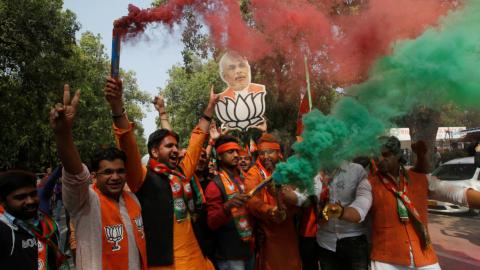