India is in a desperate fight to deal with skyrocketing infections in a surge fast becoming bigger and deadlier across South Asia, prompting the army to open its hospitals in a bid to bring a massive humanitarian crisis under control.

India's coronavirus cases have climbed again, prompting the army to open up its hospitals in a desperate bid to control a massive humanitarian crisis created by an acute shortage of beds, medicines and oxygen.

With 386,452 new cases in 24 hours on Friday — a new global record — India now has reported more than 18.7 million since the pandemic began, second only to the United States.

The Health Ministry also reported 3,498 deaths in the last 24 hours, bringing the total to 208,330. Experts believe both figures are an undercount, but it's unclear by how much.

Experts blamed the surge on new, more contagious virus variants and mass public gatherings such as political rallies and religious events that were allowed to continue.

Indian scientists appealed to Prime Minister Narendra Modi to publicly release virus data that would allow them to save lives, prompting the army to open its hospitals in a desperate bid to control a massive humanitarian crisis.

India's pandemic response has been marred by insufficient data and the online appeal — signed by over 350 scientists on Friday afternoon — asks government to release data about the sequencing of virus variants, testing, recovered patients and how people were responding to vaccines.

The appeal urged the government to widen the number of organisations sequencing the virus to study its evolution, and also increase the number of samples being studied.

Citizens cry out for help

Distraught relatives were also crying and pleading for help in hospitals in various cities in India.

Daily deaths have nearly tripled in the past three weeks, reflecting the intensity of the latest surge.

All vaccination centres in India's financial capital of Mumbai shut for three days due to a shortage of vaccines, authorities said, as the country posted another record daily rise in coronavirus cases.

The first US emergency aid to India arrived on Friday as several states said they would be unable to begin vaccinating all over-18s from this weekend as planned.

The first of several shipments, which flew in from the Travis military base in California, followed talks this week between US President Joe Biden and Modi.

The surge in India has created huge worries for Bangladesh, which shares a land border stretching 4,000 km (2,500 miles) with India and where infections and deaths have surged in recent weeks.

The Muslim-majority country of 160 million people is under a lockdown lasting through May 5, which authorities say could be extended.

An infection surge in Nepal also prompted its government to impose new lockdowns in major cities and towns, restricting the movement of people and vehicles and shuttering markets, offices and schools.

And for many weeks, the number of daily Covid-19 infections in the island nation of Sri Lanka stood below 200. But last week, the figure suddenly surged and reached 1,466 on Thursday, the highest amount in a single day since the start of the pandemic.

So far many countries have detected the the B.1.617 variant of the novel coronavirus, currently present in India, including Britain, France, Germany, Romania, Switzerland, Belgium, Ireland, Vietnam, and Uganda

French Health Minister Olivier Veran told France info radio on Friday that it was still unclear if available Covid-19 vaccines were effective against the Indian variant, and he added that the danger of this variant must not be underestimated. 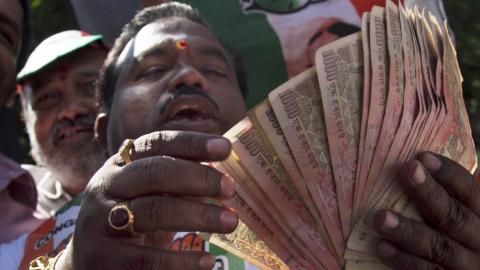 The human and financial cost of India's move to digital currency