Ever since the Bharatiya Janata Party came into power in 2014, it has taken several steps that are seen as shaping the country's national identity to match their religious views, that India is a nation of and for Hindus.

Prayag, the Sanskrit word for “place of sacrifice,” refers to the Hindu belief the creator of the universe made his first offering in the city at the point where the Ganges and Yamuna rivers meet.

A change in the names of the state's Allahabad University, Allahabad High Court and  Railway Station will also soon follow suit, according to government sources.

“Today, the BJP government has rectified the mistake made by Akbar," a state BJP spokesperson said.

Mughal emperor Akbar had named the area Allahabad in the late 1500s.

Ever since the Hindu nationalist Bharatiya Janata Party (BJP) came into power in 2014, it has taken several steps that are seen as shaping the country's national identity to match their religious views, that India is a nation of and for Hindus.

Having a secular constitution, India is a nation of 1.3 billion people with Hindus making up about 80 percent of the country's population, and is home to roughly 172 million Muslims who form the third-largest Muslim population in the world.

Even though several Indian governments have in the past also changed the names given to roads and towns by the sub-continent's British colonisers, the incumbent government's efforts are more in line with the BJP's stance of  a “Hindu first” version of the country.

But many criticise the Narendra Modi-led government of ignoring the concept of "all-inclusiveness" and sensitivities of other minority communities living in the country.

In September, 2017, the BJP renamed Mughalsarai Junction Railway Station in the state of Uttar Pradesh after RSS ideologue Deen Dayal Upadhyaya, because the previous name referred to the Mughal dynasty.

Many Muslim names in street of the capital New Delhi removed from the signs in 2015, including Aurangzeb Road.

In the run-up to state elections in Rajasthan state, four Muslim-sounding village names were given names rooted in Hindi.

Some of these steps include stopping the  funding for the iconic Taj Mahal that was constructed by Mughal emperor Shah Jahan in memory of his wife Mumtaz Mahal.

The Taj Mahal, designated a UNESCO World Heritage Site in 1983 with its story almost as famous as its architecture, has also been taken out of the state’s tourism brochure in 2017 by the BIJ.

Efforts have also been made to erase the Mughal rule era of the subcontinent from the syllabus textbooks. 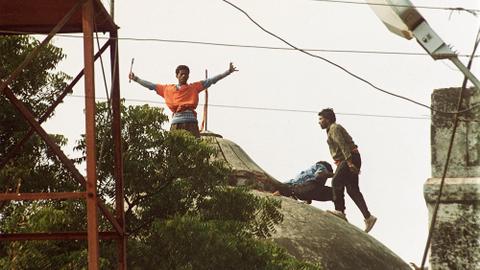