Critics say "triple talaq" is wrong but believe the practice should be reviewed by community leaders rather than BJP government, long accused of bias against minority Muslims.

India's Parliament approved a bill on Tuesday outlawing the centuries-old right of a Muslim man to instantly divorce his wife, drawing accusations of government interference in a community matter.

Prime Minister Narendra Modi's Hindu nationalist administration has been pushing to criminalise "triple talaq," under which a man can divorce by uttering the word "talaq," meaning divorce in Arabic, three times in his wife's presence.

Following Tuesday's upper house vote it now only requires the signature of the president — considered a formality — to become law.

Let there be no doubt #TripleTalaqBill is an extension of Modi govt’s anti-Muslim politics.
It is not only against Muslim men but against Muslim women as well.
It satisfies only one agenda of this govt-
Demonise Muslim men,Patronise Muslims women.
And appease the Hindu vote bank.

The lower house backed the bill, which will make anyone practicing instant divorce liable to prosecution, last week. India is one of the few countries where the practice has survived in law.

"An archaic and medieval practice has finally been confined to the dustbin of history! Parliament abolishes Triple Talaq and corrects a historical wrong done to Muslim women. This is a victory of gender justice and will further equality in society. India rejoices today!” tweeted Prime Minister Narendra Modi.

This is an occasion to salute the remarkable courage of those Muslim women who have suffered great wrongs just due to the practice of Triple Talaq.

The abolition of Triple Talaq will contribute to women empowerment and give women the dignity they deserve in our society.

"This is a historic day, the injustice that was going on with Muslim women, India's Parliament has given them justice," Law Minister Ravi Shankar Prasad told reporters at parliament.

Some Indian Muslim groups have said triple talaq is wrong, but believe the practice should be reviewed by community leaders rather than the government.

I need a few clarifications on #TripleTalaq law

1. Man says talaq talaq talaq. He is arrested & put in jail. Wht is d status of woman? Is she divorced or not? How does she keep 'body & soul together' with husband (former husband?) in jail? Does she go through iddat or not? https://t.co/TvfV9TWTvH

Asaduddin Owaisi, an MP from the opposition All India Majlis-e-Ittehadul Muslimeen party said the BJP was targeting Muslims while having failed to reform Hindu society.

Critics have long accused the BJP of bias against minority Muslims. The BJP denies the allegation but says it is opposed to the appeasement of any community.

Most of the opposition members expressed concern about the provision for a three-year jail term and claimed that the law would be misused to victimise Muslims. 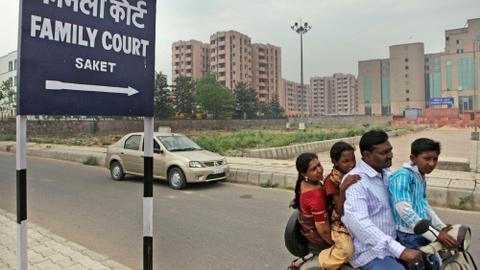