Authorities in India-administered Kashmir have ordered service providers to indefinitely block the internet ahead of a planned rally to observe the first anniversary of popular rebel commander Burhan Muzaffar Wani – whose killing in 2016 sparked months-long anti-India demonstrations in the disputed region.

A popular commander, Wani was shot dead by Indian soldiers on July 8 and since then civilians have played an increasingly active role in the rebellion against Indian rule.

"In view of the apprehension of misuse of Internet services by anti-national elements, which is likely to cause deterioration in law and order situation, you are directed to block all social media sites on lease line in Kashmir Valley from July 6 at 2200 hours till further order," read a police order to Internet service providers in the region.

Let's all welcome GST and 'no internet'. This is democracy's seasonal offer of 'buy one, take one free'. | #Kashmir pic.twitter.com/7dCh5xF8jv

Kashmir's pro-independence leaders – most of whom have been either confined to their homes or jailed ahead of the anniversary – have called for a week of protests and a rally at Wani's village in the southern Tral area from July 8.

On Thursday, pro-independence leader Shabir Shah announced the posthumous award Tamgha-e-Jurrat or Star of Courage to Wani "for his courage, steadfastness, and immense contribution to the freedom movement," the English-language newspaper Rising Kashmir reported.

Syed Ali Shah Geelani – another popular leader who remains under house arrest for over eight years – called Wani a "role model for our youth," saying in a statement that the sacrifices rendered by Wani are "praiseworthy and exemplary."

Measures to stop activists from moving

One senior officer said that police stations across south Kashmir were full of motorbikes seized to stop activists moving between villages.

But some officials said the challenge now is to deal with public anger rather than the threat posed by rebels.

"The armed militants are not much of a challenge," one senior security said on condition of anonymity.

"Counter-insurgency operations have been intensified and we are eliminating them. But in absence of any political forces engaging the people, they (rebels) have galvanised the public sentiment against India."

#Kashmir: PDP-BJP Govt again loses the battle for a narrative, as it blocks mobile internet & SM websites for 41st time in last 30 months!!!

"We are well prepared to handle any situation in Kashmir," a senior Indian interior ministry official Rajiv Mehrishi said.

Meanwhile, a Birmingham rally to commemorate the death of Wani was banned after the Indian government made an official objection to the UK. The UK remains the hub of Kashmir's diaspora where the rally was planned.

Kashmir, a Muslim-majority Himalayan region, is held by India and Pakistan in parts and claimed by both in full. A small sliver of Kashmir is also held by China.

Kashmiri resistance groups in India-administered Kashmir have been fighting against Indian rule for independence or for unification with neighbouring Pakistan.

BJP has ruled out talks with Pakistan and resistance groups over the final settlement of the dispute.

Both govt in #Srinagar an #Delhi must realise that banning internet or locking down #Kashmir won't help. Only solution is to admit and talk

Analysts say this has intensified public opposition to Indian rule in Kashmir, where nearly 100 youths joined the rebel ranks since Wani´s death.

Many have taken weapons from police and paramilitary forces during patrols.

The death of the 23-year-old Wani, who had built up a big following on social media as he posed with an AK-47, sparked a huge outpouring of grief in Kashmir.

Nearly 100 civilians were killed in mass protests in the months that followed, most shot dead by Indian soldiers and paramilitary police.

Many others were blinded partially or completely in the pellet firing by Indian troops and police.

The man who pioneered Internet bans in Kashmir is amused the next govt. didn't even let him have that record. https://t.co/wAnaPyHgfC

Pakistan said the designation was unwarranted saying "the designation of individuals supporting the Kashmiri right to self-determination as terrorists is completely unjustified." 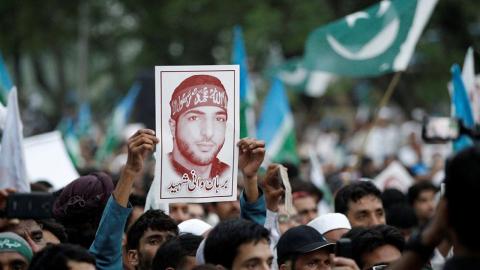 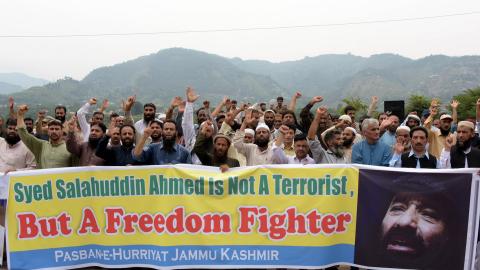 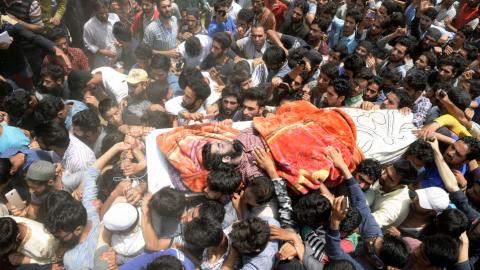