Tension remained high on Tuesday in India-administered Kashmir where restrictions and communication blockade completed 30 days following the region's loss of nominal autonomy and subsequent claims of "normalcy" by Indian officials and media.

The disputed region has been on tenterhooks after India's right-wing Bharatiya Janata Party (BJP) led by Prime Minister Narendra Modi scrapped the special rights from the Muslim-majority area on August 5.

Since then tens of thousands of heavily-armed Indian troops have fanned across Kashmir to enforce a stringent lockdown while arresting thousands of Kashmiris and using tear gas and pellet-firing shotguns against stone-throwing protesters.

Earlier on Monday, Indian authorities claimed 90 percent of the disputed region was free of daytime restriction.

"Daytime restrictions have been fully lifted from 92 police stations, up from 81 last week," said Rohit Kansal, a top government official of the region.

"This makes 90 percent of the valley free of daytime restrictions of any kind," he said.

But the ban on communications and restriction on movement continued on Tuesday, especially in Kashmir Valley, which has left the region reeling, cutting off its eight-million-strong population from the outside world.

A complete shutdown of businesses, public transport, and educational institutions continued on Tuesday.

The new arrangement will take effect after October 31. The immediate implications are that Kashmir will lose its flag, criminal code, and the constitution.

The changes will also lift a ban on property purchases by non-residents, opening the way for Indians outside the territory to invest and settle there.

The local Muslim population has long feared such measures would change Kashmir's demography and culture.

Erasing the autonomy of the region will inflame the sentiments of most Kashmiris who demand that the territory be united either under Pakistani rule or as an independent country.

Two of the three wars India and Pakistan have found since independence were over Kashmir.

More than 500,000 Indian soldiers are stationed in Kashmir to counter a rebellion that seeks to secede from India, and there are near-daily demonstrations against Indian control.

About 100,000 people have been killed in the uprising and the ensuing crackdown since 1989.

Thirty days of lockdown in Kashmir. No communication with the rest of the world. Meanwhile Bill Gates foundation honours Modi for building toilets in India.

Meanwhile, families whose relatives have been detained in Kashmir say they are struggling to meet them.

Afroza is a mother from Srinagar who has a heart-wrenching daily routine over the two weeks. She visits a local police station in the capital to meet his young son who was arrested as part of massive detentions in the region.

"Two weeks ago, police raided our house at 2 am local time [2030GMT] and they picked my son. Since then he has lodged in the police station. My husband and I have been coming almost every day to meet him," the 41-year-old mother told Anadolu Agency outside a local police station in Raj Bagh neighbourhood.

"You can understand how difficult it is for a mother and father to stay away from their son," she said woefully.

"We are just praying that he will be released soon," said Afroza, who refused to name her son, 19, due to legal and safety concerns.

Abdul Majeed, 39, a resident of the Soura area in capital Srinagar's north, is the uncle of another 19-year-old detainee, who visit the local police station constantly to meet his nephew held in detention since August 17.

"For the first week, they [police] were not allowing us to meet [the nephew]. But we have started meeting him and he is fine. We are trying to know under what charges he has been in detention," said Majeed.

"At least three senior Kashmiri journalists Aijaz Hussain, Fayaz Bukhari & Nazir Masoodi were asked to vacate the government accommodations as soon as possible, which is nothing but harassment aimed at coercing journalists to toe a particular line." #Kashmir Press Club statement. pic.twitter.com/0z99WUitO4

India's clampdown on the region has also taken a heavy toll on weddings and related business.

After a year-long countdown, Arshi Nisar's wedding plans are in tatters, with the Kashmiri bride-to-be fearing for her guests' safety as Indian clampdown on the Himalayan valley leaves residents on edge.

The marketing manager had originally planned a three-day extravaganza, including a special make-up session, music, and a huge canopy to accommodate more than 700 guests invited to partake in the traditional 10-to-15 course Kashmiri feast known as wazwan.

But like thousands of families in the troubled region, Nisar has resigned herself to an austere event, with no more than 40 guests in attendance –– if they are able to venture out of their homes.

"I grew up dreaming about a grand wedding but there is not much to celebrate because of the situation," the 29-year-old told AFP news agency.

"Now we have decided on a very simple ceremony but I am still worried (about) how my in-laws and my family will move around in these tense times."

But this time, even the usually buoyant wedding industry –– a major driver of Kashmir's economy –– is buckling under the strain, with hundreds of notices appearing in newspapers and on television in recent weeks, postponing or cancelling ceremonies.

In a status-conscious society famed for its hospitality, weddings have long served as a showcase for wealth and generosity, with guest lists regularly topping 1,500 and costs running upwards of $30,000.

"Families save for years or decades to splurge on weddings," Bilal, who wanted to be identified only by his first name, told AFP.

Parents start preparing for their child's marriage almost immediately after birth, he said.

So when only 15 percent of the invited guests turned up for his brother's wedding last month, "it was a heartbreak for the family," he said.

For others consumed by wedding preparations, the communications clampdown has made it near impossible to contact suppliers and event managers.

Days before his sister Tehmina's wedding, Muntazir, who declined to give his last name, is struggling to procure everything from a wedding bed to jewellery and clothing for her trousseau.

"I had placed an order for a bed and given clothes for stitching to the tailor. Both the stores are closed and there is no way to contact them," the 41-year-old told AFP.

Kashmiri journalist Gowhar Geelani has been barred from travelling to Germany by Indian authorities. He says this is an attempt to silence voices from Kashmir pic.twitter.com/RmU56FluMa

'You can't have dreams in Kashmir'

Even hiring cooks and butchers was a challenge because of the communication blackout, he said.

"Weddings are a once in a lifetime event," he said.

"As a brother, I feel gutted by the thought that her wedding is devoid of the traditional colour."

For bride-to-be Nisar, her September wedding to her boyfriend of five years came after a hard-fought battle with their parents to overcome resistance to the marriage.

"We had a tough time convincing our families for the relationship and this was the time to be happy," she said.

But, she added: "you cannot have dreams in Kashmir." 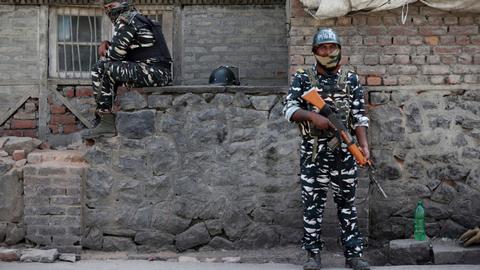 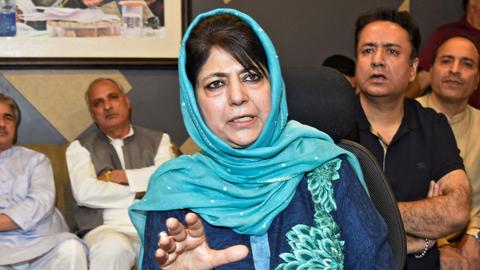