Thousands of people in India-administered Kashmir have voted amid tight security and freezing cold temperatures in the first phase of local elections, the first since New Delhi revoked the disputed region's limited autonomous status.

Nearly six million people across the region's 20 districts are eligible to elect 280 members of District Development Councils in a staggered eight-phase process that ends December 19.

Authorities deployed tens of thousands of additional soldiers in the already highly-militarised region to guard the vote.

Indian forces laid razor wire and erected steel barricades on roads around many of the 2,146 polling stations set up for the first phase.

Observers said only small numbers braved the security, coronavirus fears, and snow-covered terrain to elect members of their local councils.

We are fighting India to get freedom for #Kashmir. We are not fighting against each other. We have the same goal.

India says the polls are a vital grassroots exercise to boost development and address civic issues and will uproot corruption from the region.

Pro-independence or pro-Pakistan groups that challenge India's sovereignty over Kashmir have in the past called for a boycott of elections, calling them an illegitimate exercise under military occupation.

Indian Prime Minister Narendra Modi's Hindu nationalist Bharatiya Janata Party (BJP) has fiercely campaigned for the election in the Muslim-majority region in a bid to replace local Kashmiri pro-India parties that had formed an alliance.

The Kashmiri alliance has vigorously opposed Modi’s government after it annexed the region, revoked its semi-autonomous status in August last year, annulled its separate constitution, split the area into two federal territories (Ladakh and Jammu-Kashmir) and removed inherited protections on land and jobs.

The current voting is part of a three-tier process in which residents directly elect their village representatives, who then vote to form development councils for clusters of villages called "Block Development Councils".

Members for the larger, third, and top layer "District Development Councils" are also directly elected by the residents.

Amid tight security, First phase of DDC elections and panchayat by-polls after 370 abrogation in Jammu and Kashmir pic.twitter.com/vhIhmDo3XP

No legislative powers to elected members

The elected members have no legislative powers and are only responsible for the economic development and public welfare of the region.

Officials are also simultaneously conducting the election for hundreds of vacant seats in village councils that remained uncontested during 2018 polls.

At a polling booth in the Kashmir valley, Faizi, 70, told she had voted "to facilitate development work, like paving the roads."

The BJP has a very small base in the Kashmir valley, the heart of the decades-old anti-India insurgency, but has significant support in four Hindu-majority districts in the Jammu area.

The Kashmiri alliance has accused the government of interfering with their campaigning, a charge denied by the election commission.

The alliance also accused authorities of putting its top leader Mehbooba Mufti, a former top elected official and ally of Modi, under house arrest on Friday.

Police denied Mufti was restricted to her home.

Many of the 296 candidates up for election Saturday have been lodged in hotels because of security concerns. In the past, rebels have targeted candidates.

Some Kashmiris view the polls cynically as a move to create a new political elite loyal to the Modi government.

"This is an ideological vote," said Najeeb Khan, a voter in Srinagar, the region's main city. "People are considering it a referendum against the BJP."

Ali Muhammad Tantray, a candidate of the local National Conference party, said, "The people want to keep the BJP at bay because of the oppression the people of Jammu, Kashmir, and Ladakh witnessed from the Indian government that was very threatening."

Arif Laigroo, a voter said, "This election has nothing political. It is absolutely the election for development."

Kashmir is divided between India and Pakistan and both rivals claim the region in its entirety.

Rebels have been fighting against Indian rule since 1989.

Most Muslim Kashmiris support the rebel goal that the territory be united either under Pakistani rule or as an independent country.

Pakistan denies the charge, and most Kashmiris call it a legitimate struggle for freedom.

Tens of thousands of civilians, rebels, and Indian forces have been killed in the conflict. 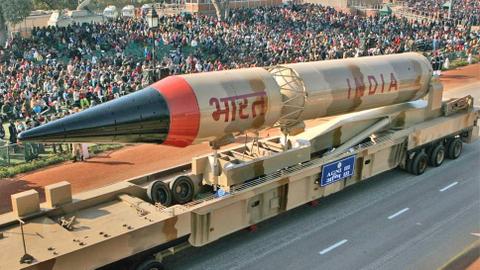 India and Pakistan: how much of a nuclear threat do they pose?