A Malaysian court ordered former prime minister Najib Razak to present his defence against seven counts of criminal breach of trust, money laundering and abuse of power in a case linked to a scandal surrounding state fund 1MDB.

A Malaysian judge on Monday ordered former Prime Minister Najib Razak to enter a defence at his first corruption trial linked to the multibillion-dollar looting at the 1MDB state investment fund that helped spur his shocking election ouster last year.

A calm Najib said in court he would testify in his defence when the trial resumes.

High Court Judge Mohamad Nazlan Mohamad Ghazali said the prosecution had established its case on charges of abuse of power, breach of trust and money laundering. The seven charges relate to $10.1 million that allegedly went into Najib's bank accounts from SRC International, a former unit of the 1MDB fund.

The judge said it was clear that Najib, who was also finance minister at the time, had "wielded overarching authority and power" in SRC and taken actions for "personal and private interest." He said the prosecution has established the "ingredient of dishonesty" in misappropriating the funds.

Defence lawyers said Najib would be the first witness called when the trial resumes December 3.

Najib is also charged in four other cases in the 1MDB scandal that led to investigations in several countries.
His wife, several officials from his government, and the US bank Goldman Sachs also face charges related to the scandal.

Monday's ruling was seen as a key test for the legal system and the credibility of Prime Minister Mahathir Mohamad's government, which won a historic victory in the May 2018 election on an anti-corruption platform. The polls led to Malaysia's first change of government since independence from Britain in 1957.

In an immediate reaction, Sports Minister Syed Saddiq Syed Abdul Rahman tweeted: "Praise God. May justice be on the side of the people."

The patrician former leader, whose father and uncles were the country's second and third prime ministers respectively, could face years in office if convicted. Najib, 66, denies any wrongdoing and accuses Malaysia's new government of seeking political vengeance.

Mahathir, 94, was premier for 22 years until his retirement in 2003 but made a political comeback amid anger over the 1MDB scandal. His government soon reopened 1MDB investigations that had been quashed under Najib.

US investigators say Najib's associates pilfered more than $4.5 billion from 1MDB between 2009 and 2014 and laundered the money through layers of bank accounts in the US and other countries to finance Hollywood films and buy hotels, a luxury yacht, artworks, jewellery, and other extravagances. More than $700 million from the fund allegedly landed in Najib's bank account.

Truckloads of luggage stashed with cash, jewellery and hundreds of expensive designer bags worth a staggering $265 million were seized from Najib's and his wife's home and other properties.

In all, he faces 42 charges of criminal breach of trust, graft, abuse of power and money laundering in the five criminal cases.

His second trial, the biggest and most complex, started in August and is ongoing. Najib faces four counts of abusing his power to receive more than $731 million from 2011 to 2014, and 21 other charges of receiving, using, and transferring illicit funds linked to 1MDB. Dates for the other trials have not been set.

Najib's lawyers say he is the victim of a conspiracy by rogue bankers including one identified by US investigators as the mastermind behind the 1MDB fiasco. Prosecutors say Najib was the real power behind the fraud in the funds and its local unit. 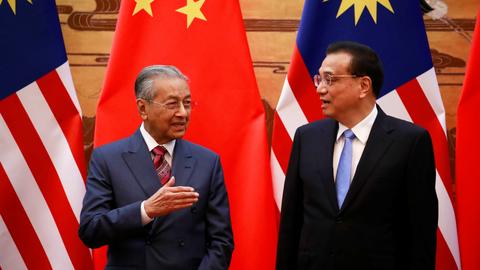