The passage of the budget is seen as vital for both the economy and Prime Minister Muhyiddin Yassin, whose position is under threat from the opposition and cracks in his coalition after just eight months in office.

Malaysia's government has unveiled an expansionary budget to spur on activity in an economy badly hit by the Covid-19 pandemic, amid uncertainty over the stability of the ruling coalition.

Parliament is expected to vote on the proposed measures on November 25, and the passage of the budget is seen as vital for both the economy and Prime Minister Muhyiddin Yassin, whose position is under threat from the opposition and cracks in his own coalition after just eight months in office.

The coalition has a razor-thin majority, and if the budget were to be voted down by parliament, it would amount to a no-confidence vote for Muhyiddin and would plunge the country into more political instability.

"Never in modern human history has a pandemic had such a huge impact ... this is an unprecedented crisis," Tengku Zafrul told parliament.

The government boosted spending in the 2021 budget by 2.5 percent to 322.5 billion ringgit ($77.94 billion) even as the fiscal deficit is expected to hit 6 percent this year, its highest since the 2009 global financial crisis, a government report showed.

"There has been an urgent need to ensure substantial stimulus measures and (the) economic recovery plan are implemented expeditiously," Muhyiddin said in his foreword for the government's 2021 fiscal outlook report, released ahead of the budget speech.

Spending grew in 2020 as the government rolled out 305 billion ringgit worth of stimulus packages to cushion the blow from Covid-19, while revenues shrank along with the economy and were projected to fall 4.5 percent this year, the report showed.

But the fiscal deficit will likely narrow slightly in 2021 to 5.4 percent, with the economy seen rebounding 6.5 to 7.5 percent and revenues rising next year on improved domestic and global demand, it said.

Malaysia's trade-reliant economy suffered its first contraction in over a decade in the second quarter, as the coronavirus outbreak hit business activity and exports, causing gross domestic product (GDP) to drop 17.1 percent.

Growth next year is expected to be supported by a 2.7 percent rise in gross exports after a 5.2 percent fall in 2020, according to a separate report on the economic outlook.

But government debt is also expected to rise moderately to 61% of GDP in 2021, above the government's self-imposed limit of 60 percent, as it boosts borrowing to finance fiscal support.

It will also propose to raise by 20 billion ringgit the ceiling of a newly established Covid-19 fund for aid packages, the needs of frontline workers and the procurement of vaccines.

The total spending increase includes a 4.3 percent rise in the operating budget (the cost of running the government) to 236.5 billion ringgit, while development spending on items such as infrastructure will jump 38 percent to 69 billion ringgit in 2021.

Monetary policy will continue to provide support to the economic recovery next year, the government said in the economic outlook report, flagging "the resurgence of Covid-19 cases, geopolitical tensions and weak commodity prices" as downside risks. 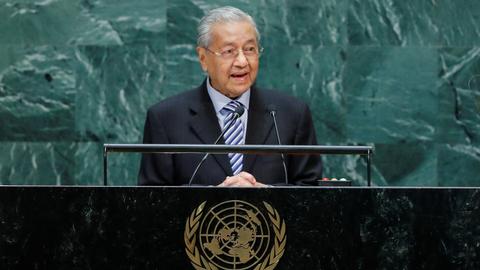