An emergency imposed after a court ordered the release of jailed politicians will be allowed to expire after allowing time for the government to investigate corruption allegations against the judges who issued the order.

Maldives President Abdulla Yameen will lift a 45-day state of emergency on Thursday and the government will bring bribery charges against former leader Maumoon Abdul Gayoom and the chief justice, said a senior Maldives diplomat.

Yameen imposed a state of emergency on February 5 for 15 days to annul a February 1 Supreme Court ruling that quashed convictions against nine opposition leaders and ordered his government to free those held in prison. He later extended the state of emergency for another 30 days with parliament approval, a move challenged by the opposition.

Under the emergency, Yameen's administration arrested former president Maumoon Abdul Gayoom, the chief justice, another Supreme Court judge, and a Supreme Court administrator on allegations of attempting to overthrow the government. They have all rejected the charges.

"Unless something unusual happens, we should not have emergency by Thursday," Mohamed Hussain Shareef, Maldives Ambassador for Sri Lanka told a Foreign Correspondents Association forum on Monday.

"The government has no intention of extending it any further barring very unusual circumstances like widespread violence. The intention is to do away with this state of emergency when the current 30 -day period expires on March 22."

"That is definite. We know that charges will be pressed against the four of them,” Shareef said.

Gayoom is accused of bribing the three legal professionals to overthrow the Yameen government.

Despite opposition claims that hundreds of people have been arrested under the state of emergency, Shareef said only 38 had been arrested so far while others were "detained and released."

Maldives police said on Saturday that at least 139 opposition protesters were arrested as they attempted to defy orders under the state of emergency and march into the high-security zone in the capital Male.

Rights group Amnesty International has said the Maldivian government was using the emergency "as a licence for repression, targeting members of civil society, judges and political opponents."

Yameen's government retains a majority in parliament in the absence of the opposition's 12 MPs who were stripped of their seats by Yameen's party for defecting last year. 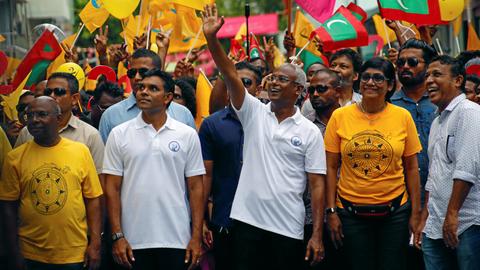