The US Ambassador to Thailand says Myanmar is not part of an annual joint military exercise in eastern Thailand as US lawmakers demanded Myanmar's exclusion from the exercise.

Thailand and the United States downplayed the presence of a Myanmar military officer at the opening on Tuesday of the largest annual joint military exercise in southeast Asia.

Myanmar's military has been accused of massive human rights violations in its crackdown on the Rohingya Muslim minority, who have fled by the hundreds of thousands to neighbouring Bangladesh. US lawmakers had demanded Myanmar's exclusion from the exercise.

"The truth is Myanmar is not a participant nation," US Ambassador to Thailand Glyn T. Davies told reporters at the Cobra Gold exercise in eastern Thailand.

"They're not part of the exercises here." He did not explain the Myanmar officer's attendance.

Thai Gen. Thanchaiyan Srisuwan acknowledged inviting Myanmar to the opening ceremony. However, Myanmar's flag was not flown at the ceremonial opening. It's believed the Thais invited Myanmar to send three personnel though only one appeared to be attending.

The US in a statement said 11,075 service members from 29 countries are participating.

In Washington last week, both Republican and Democrat members of congress criticised the invitation to Myanmar.

Senator John McCain, the Republican chair of the Senate Armed Services Committee, told The Associated Press "militaries engaged in ethnic cleansing should not be honing their skills alongside US troops," a reference to accounts of atrocities committed by Myanmar troops. 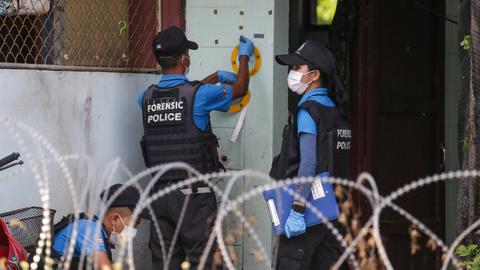