Some 175,000 people were eligible to vote in the remote islands where separatists urged indigenous Kanak voters to choose self-determination and throw off the shackles of "colonial" authorities in Paris.

The Pacific islands of New Caledonia opted to remain part of France on Sunday, early results showed, as voters rejected independence in a closely-watched referendum seen as a measure of support for Paris in one of its many strategic outposts.

Some 18,000km from the French mainland, NewCaledonia is home to a quarter of the world's known supplies of nickel –– a vital electronics component –– and is a foothold for France in the Pacific.

With 70 percent of voting slips counted, 59.5 percent of people had rejected the proposition that New Caledonia become independent, the local electoral authority said.

Test of support for France

The referendum, the result of a 30-year long de-colonisation process, is the first auto-determination vote to be held in a French territory since Djibouti in the Horn of Africa voted for independence in 1977.

The vote was a closely-watched test of support for France in one of its many territories scattered around the globe.

First results trickled in from the referendum, with a village of about 600 people the first to declare, voting overwhelmingly against a split from France.

New Caledonia's High Commissioner tweeted that Farino on the territory's main island voted by a margin of 9 to 1 against independence, and that nearly 95 percent of the village's registered voters cast ballots.

The participation rate was 41.8 percent at midday, compared to 27.3 percent at the same time during local elections in 2014, the High Commission said on Sunday.

Some 175,000 people were eligible to vote in the remote islands fringed by spectacular beaches, with opinion polls already predicting a large majority in favour of staying French.

But there are fears the referendum could inflame tensions between indigenous Kanak people, who tend to favour independence, and the white population, which boiled over into deadly violence in the 1980s.

It led to the 1998 Noumea Accord which paved the way for the steady devolution of powers as well as Sunday's referendum.

Separatists had urged Kanak voters to choose self-determination for Kanaky, their name for New Caledonia, and throw off the shackles of "colonial" authorities in Paris.

Independence vote in the French Pacific islands of New Caledonia is seen as a test of support for France in one of its many territories scattered around the globe. Here’s a look at French territories https://t.co/qalpgvx4en pic.twitter.com/YdEGKk7FZQ

"It's a great day for us. My father, my grandfather fought for this country and today is the second fight in the ballot box," said pro-independence supporter Patrick Watrone on Sunday, dressed in the colours of Kanak flag.

But indigenous people make up less than 50 percent of the electorate and some Kanaks back staying part of France, not least due to the  $1.5 billion (1.3 billion euros) the French state hands to the islands every year.

Going it alone, "I'm not sure we have all the assets we'd need to succeed," said Marc Gnipate, a 62-year-old pensioner.

Polls suggested 63 to 75 percent of voters will opt against breaking away from France, which claimed the islands in 1853 and once used them as a penal colony.

Under the 1998 deal, in the event of a "no" vote two further referendums on independence can still be held before 2022.

Independence from France?
New Caledonia holds vote —Independence supporters on the Pacific island of New Caledonia, taken by France without a treaty with the indigenous people in 1853, believe that China can replace France as its primary investorhttps://t.co/nVXJyh0BiW pic.twitter.com/995PpCk4N7

Balancing China in the Pacific?

French President Emmanuel Macron, who is due to give a televised address after the results, has largely stayed clear of the campaign but during a visit to Noumea in May he declared "France would be less beautiful without New Caledonia".

He also raised concerns over increasing Chinese influence in the Pacific, where Beijing has invested heavily in Vanuatu, a territory which broke from France and Britain in 1980.

Accusing the US of "turning its back on the region in recent months", Macron said China was "building its hegemony step by step" in the Pacific – suggesting an independent New Caledonia could provide Beijing's next foothold.

Australia has also expressed concerns about China's activities in neighbouring island states – which the Lowy Institute think-tank estimates received $1.78 billion in aid from Beijing from 2006-16 – boosting its own spending in response.

"It's been fortunate for Australia to have a well-resourced Western ally such as France engaged in the region, particularly at a time when there's a lot of geo-strategic change and new players like China coming into the region," she told the ABC.

"There are a few uncertainties arising now."

The faces of voters in Noumea. In only a few hours we’ll know if New Caledonia will remain with France or embrace independence. pic.twitter.com/cgFA0FcePq

Home to 269,000 people, New Caledonia is one of a handful of French island outposts – a legacy of the country's 19th-century empire – which retain strategic importance.

The referendum is a test of the appeal of remaining part of France for such far-flung territories, which are heavily dependent on state handouts but where many feel overlooked by Paris.

Both French Guiana in South America and the Indian Ocean archipelago of Mayotte have been rocked since last year by major protests over living standards and perceived neglect.

In New Caledonia, there are fears that the vote could expose tensions over stark inequalities which persist despite government efforts to redress the economic balance in favour of Kanaks.

Gangs of delinquent youths have become increasingly common on the streets and both sides fear violence among them if the "no" vote prevails. 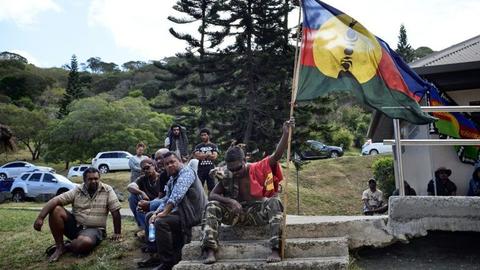