More than 500 stranded hikers have been rescued from Mount Rinjani on Indonesia's Lombok Island, two days after a powerful 6.4 magnitude earthquake struck the popular tourist destination.

More than 500 hikers and their guides have been successfully evacuated from an Indonesian volcanic mountain after a deadly earthquake triggered landslides that trapped them on the mountain, officials said on Tuesday.

Tonnes of rock and mud were dislodged on Mount Rinjani in the 6.4-magnitude quake, which struck early Sunday and was followed by scores of aftershocks, blocking the hiking routes that crisscross the mountain.

Some 560 trekkers were originally thought to have been stranded, including citizens from the United States, France, the Netherlands, Thailand and Germany, as well as many other countries, according to search and rescue officials.

Journalist Jack Hewson has the latest from Jakarta.

"There are now six people left ... They are all healthy and safe."

Hikers were able to start climbing down on Monday after guides discovered an alternate route that was unaffected by the landslides.

Most of the trekkers reached the base of the mountain by late on Monday evening, according to I Gusti Lanang Wiswananda, a spokesman for Mataram search and rescue agency.

"They were all tired, but in good condition and were checked by our medical teams on the ground upon arrival," he told AFP.

Wiswananda said one Indonesian hiker died on the mountain and a 30-person rescue team was escorting the six remaining trekkers down from Lake Segara Anak, near Rinjani's summit.

Hundreds of other hikers managed to get off the mountain on Sunday, according to officials.

At least 16 people were killed in the earthquake across affected areas of Lombok, while hundreds of buildings were destroyed, including a health clinic.

The quake created panic on the holiday island and sent locals and tourists running outside their homes and hotels.

Helicopters and search teams were deployed to scour the volcano's slopes and drop food supplies for those stranded on the mountain.

Some 189 foreign tourists, 173 domestic tourists and 181 porters and guides reached the base of the mountain last night, Sutopo said.

Rising some 3,726 metres (12,224 feet) above sea level, Rinjani is the second-tallest volcano in Indonesia and a favourite among sightseers keen to take in its expansive views.

Hiking trails on the mountain were closed following the quake due to fear of further landslides.

The epicentre of the earthquake was 50 kilometres (30 miles) northeast of Lombok's main city Mataram, the United States Geological Survey said, far from the main tourist spots on the south and west of the island.

The initial tremor was followed by two strong secondary quakes and more than 100 aftershocks.

A Malaysian was among the dead, with another six citizens injured, the foreign ministry in Kuala Lumpur said.

A total of 5,141 people are staying in temporary shelters and in need of clean water, according to officials. 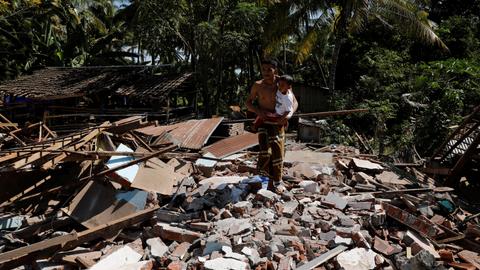 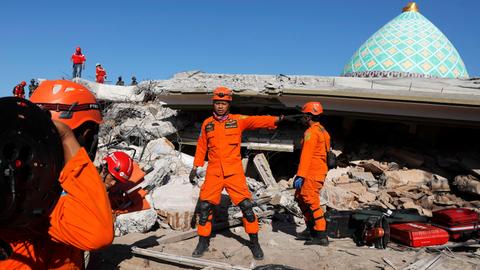 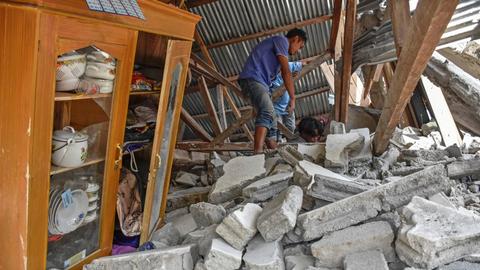