Militaries of both sides agreed to ensure ceasefire along the de facto border in line with the 2003 agreement between the two nuclear rivals, statements from both armies say.

Pakistan and India have agreed to stop trading artillery fire in the disputed Himalayan region of Kashmir, and on Wednesday the situation was calm after months of routine skirmishes that killed dozens of soldiers and civilians.

Pakistan's military said late on Tuesday that local generals reached the understanding using a special hotline set up to defuse tensions in Kashmir, which is split and administered between Indian and Pakistani zones of control.

Both nuclear-armed powers claim Kashmir in its entirety, and the territorial dispute has ignited two wars between Pakistan and India since they gained independence in 1947.

TRT World's Neha Poonia in New Delhi and Kamran Yousaf in Islamabad explain the significance of the ceasefire between the two nuclear neighbours and what it means to the people of the disputed region.

A popular armed rebellion since 1989 for independence or the merger of the territory with Pakistan in India-administered Kashmir and brutal Indian crackdown has killed nearly 100,000 people.

Both sides "agreed to undertake sincere measures to improve the existing situation, ensuring peace and avoidance of hardships to the civilians along the borders," the Pakistani military said in a statement.

Indian & Pakistani army seem to have agreed to again implement ceasefire agreement of 2003 along the Line of Control in Jammu & Kashmir. I hope it is successful. Will it lead to complete cessation of the hostilities in Jammu & Kashmir? pic.twitter.com/kk88lbk5BA

It said that if future violence occurs in the disputed region, "restraint will be exercised and the matter will be resolved through utilisation of existing mechanisms of hotline contacts and border flag meetings at local commander's level."

The Indian army confirmed the agreement, saying both sides had pledged to "undertake sincere measures to improve the existing situation to ensure peace and avoidance of hardships to the civilians along the borders."

The two sides also agreed to fully implement a 2003 ceasefire that has been repeatedly violated.

Tensions have soared in recent weeks, as both sides have launched artillery assaults across the de facto border Line of Control dividing the region.

This is what happened inside Jamia Masjid, Srinagar after Indian forces fired pellets and teargas shells to disperse the people. More than 20 people were injured. Where is the ceasefire? #Kashmir pic.twitter.com/yUW6arB9wA

Each side has accused the other of starting the hostilities in violation of the 2003 accord.

On the Indian side, the fighting has driven people from villages along the border, and government buildings have been converted into temporary shelters.

Houses have been damaged, and dozens of schools in villages along the frontier have been closed, with authorities advising residents to stay indoors.

The shelling has cast a pall over the holy month of Ramadan in the mostly Muslim region.

The shelling typically flares up in the pre-dawn hours, when families are having a meal known as "suhoor" ahead of the daytime fast.

India announced a conditional ceasefire in India-administered Kashmir for 30 days of Ramadan. But will it really make a difference?

India says 25 civilians and 18 soldiers have been killed this year in over 800 ceasefire violations initiated by Pakistan.

Pakistan accuses Indian forces of more than 1,050 ceasefire violations this year, resulting in the deaths of 28 civilians and wounds to 117 others.

On Wednesday, Pakistani officials said villagers who fled to safer locations following recent skirmishes have been urged to return to their homes. 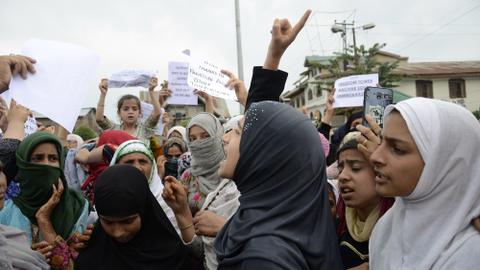