Scores of people were killed and dozens went missing in the past 24 hours as monsoon downpours and roaring floodwaters continued to pound the country.

Pakistan has neared the grim milestone of 1,000 deaths in rain-related incidents since mid-June, with swirling floods triggered by torrential downpour sweeping the country.

Another 45 people were killed and dozens went missing in the past 24 hours as monsoon downpours and roaring floodwaters continued to pound the country, according to officials and local media on Saturday.

With half of the South Asian country under water, the government announced a full-fledged deployment of the army in all four provinces, and the northern Gilgit-Baltistan region to back the civil administration, which is struggling to cope with the unprecedented magnitude of the catastrophe, state-run Pakistan Television reported.

Most of the fatalities were reported in Khyber Pakhtunkhwa, followed by Sindh and Balochistan, pushing the overall toll to 982 since June 14, according to Pakistan's National Disaster Management Authority.

However, at a press conference in Islamabad, Information Minister Marriyum Aurangzeb said that the number was over 1,000.

The ongoing monsoon spells, combined with massive flash floods, have affected 33 million Pakistanis. People in flood-ravaged areas are without shelter, electricity and gas.

Massive floods swept away hundreds of houses, restaurants, bridges, and even several multi-storey hotels perched on the banks of the Swat River in the scenic Swat Valley, a favourite tourist attraction.

The southwestern Chaman border crossing between Pakistan and Afghanistan remained closed due to heavy rains and flooding.

The week-long rains that already destroyed much of the infrastructure and agriculture in the otherwise arid province have come to an end in the eastern districts.

Journalist Syed Ali Shah has the latest on floods in Pakistan from southwestern city of Quetta pic.twitter.com/5MbZPVdDPX

In a phone call with Prime Minister Shahbaz Sharif, Erdogan expressed his readiness to extend all kinds of support to "the brotherly people of Pakistan in this difficult time, as always", Türkiye’s Communications Directorate said in a statement.

Earlier, the Turkish Foreign Ministry released a statement saying that they are "deeply saddened by the loss of many of our Pakistani brothers".

Türkiye will send a plane carrying humanitarian aid to Pakistan "in order to heal the wounds of our Pakistani brothers who were affected by the flood," according to the statement.

Also, Turkish Foreign Minister Mevlut Cavusoglu spoke with his Pakistani counterpart Bilawal Bhutto Zardari over the phone, offering his condolences for those who lost their lives in the floods and pledging Türkiye’s support. 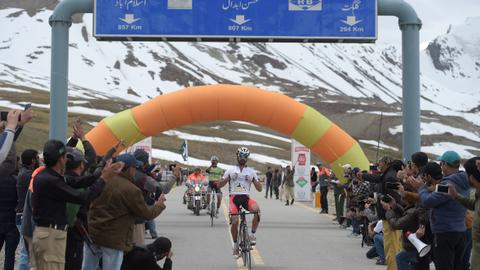