Russia calls for calm amid tensions at Tajikistan-Afghanistan border

Statement from Russia comes amid tension on the Afghanistan-Tajikistan border with the two neighbors having deployed troops who are prepared for the scenario where a clash emerges.

Russia has urged Tajikistan and Afghanistan to resolve any dispute in a mutually acceptable manner, saying it had heard reports they were sending troops to their common border, Russian news agency TASS quoted the Russian foreign ministry as saying on Friday.

"We observe with concern the growing tensions in Tajik-Afghan relations amid mutually strong statements by the leadership of the two countries," TASS quoted ministry spokesman Alexei Zaitsev as saying.

According to the Taliban's own information, tens of thousands of special forces fighters have been deployed in the Takhar province of northeastern Afghanistan, adjacent to Tajikistan, he said.

Tajikistan's foreign ministry and Taliban spokesmen were not immediately available for comment on the reports.

Tajik President Emomali Rakhmon has refused to recognise the Taliban-appointed cabinet in Kabul and lashed out at what he described as violations of human rights in the Taliban's siege of the Panjshir province where opposition forces had rallies.

The Taliban, in turn, warned Dushanbe against meddling in Afghanistan's domestic affairs. Ethnic Tajiks make up more than a quarter of Afghanistan's population, but Taliban members predominantly belong to the biggest ethnic group, Pashtuns.

Tajikistan, which hosts a Russian military base, held military parades in two border provinces on Wednesday and Thursday.

READ MORE: Will Russia let the US use its Central Asia bases to monitor terrorism?

US Defense Secretary Lloyd Austin expressed concern on Wednesday for US-trained Afghan pilots and other personnel being held in Tajikistan after fleeing across the border from Afghanistan last month as the Taliban took power.

In the war's final moments, the US-backed Afghan Air Force personnel flew dozens of military aircraft across the Afghan border to Tajikistan and Uzbekistan and were detained there. 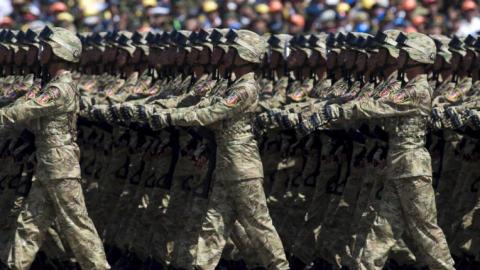