Russian, Armenian and Azerbaijani leaders to meet in Russia next week

Armenian Prime Minister Nikol Pashinyan says the three leaders will discuss the issues around "stability and security" in the Karabakh region.

Armenian Prime Minister Nikol Pashinyan has announced he would travel to Russia next week for a summit with President Vladimir Putin and Azerbaijani President Ilham Aliyev.

"There is an invitation from the Russian President to hold a tripartite meeting in Sochi on October 31. I have confirmed my participation," Pashinyan was quoted by Russian news agencies on Wednesday as saying to Armenian lawmakers.

He added that he did not know if Baku had also confirmed the meeting.

Pashinyan said the three leaders will discuss the issues around "stability and security" in the Karabakh region.

The Kremlin earlier on Wednesday confirmed that a summit would take place, but did not give a date.

"Preparations are taking place for such a tripartite meeting, it will take place, but we will inform you later of the place and the date," Kremlin spokesperson Dmitry Peskov told reporters.

Two states last met in Brussels in August for talks under the mediation of EU chief Charles Michel.

READ MORE: Karabakh's destruction should be brought to ICJ for compensation: Erdogan

Relations between the former Soviet republics have been tense since 1991, when the Armenian military occupied Nagorno-Karabakh, a territory internationally recognised as part of Azerbaijan.

During a six-week war in 2020, Azerbaijan liberated several cities, villages, and settlements from Armenian occupation, which ended after a Moscow-brokered truce.

The peace agreement is celebrated as a triumph in Azerbaijan.

In September, over 280 people were killed in fresh clashes on the Armenia-Azerbaijan border. 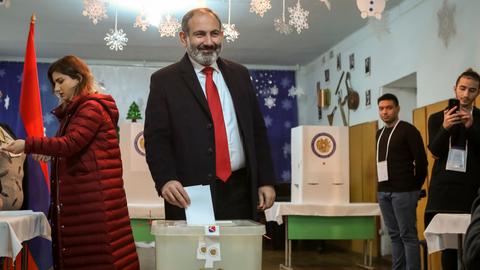