Azerbaijani and Armenian leaders held peace talks through Turkish and EU mediations in Prague, increasing hopes for a comprehensive settlement to one of the world’s most difficult political and military conflicts.

After three decades of fighting in the disputed Karabakh region, Azerbaijan and Armenia have recently shown willingness to initiate trust-building measures to reach a comprehensive peace deal thanks to international mediation coming from a few countries, mainly Türkiye.

Last week, Turkish President Recep Tayyip Erdogan played a critical role to realise an icebreaker peace talks between Azerbaijani and Armenian leaders in Prague on the sidelines of an EU meeting. Both leaders also met under Charles Michel, the chair of the EU Council, agreeing to accept the formation of a European civilian mission, which will help both sides demarcate their respective borders.

Despite occasional border skirmishes, experts believe that some crucial developments, like the September clashes–when Armenia lost more ground to Azerbaijan–are maturing conditions for both sides to reach a peace settlement.

Since the 1990s, following the collapse of the Soviet Union, Armenia has occupied the autonomous Karabakh region, which is part of Azerbaijan according to the Soviet constitution. In the Second Karabakh War in 2020, also called the 44-day War, Azerbaijan was able to get back much of the Armenian-occupied territories, gaining a battle ground advantage against Armenia. There has been an official ceasefire since November 2020.

Pirincci believes that Russia’s changing connections with both Armenia and Azerbaijan in the face of the Ukraine conflict is crucial to ensure a peace settlement, which Moscow now “appears to back”. Ankara’s strong ties with Baku figure prominently to end the conflict, he adds. Türkiye’s critical contacts with Russia is also an important factor to address the conflict.

The Turkish academic also points out that internal politics of Armenia, which could not get over the shock defeat of the Second Karabakh War, matters a lot. While Armenian Prime Minister Nikol Pashinyan understands the new geopolitical reality, opposition parties headed by pro-war factions refuse to recognise Karabakh as part of the Azerbaijan territory, he says.

“As a result, Pashinyan wants to accelerate the peace process with Azerbaijan, aiming to normalise Türkiye, which also moves toward normalisation with Yerevan to ease the Armenian prime minister’s pressure to make peace with Baku,” he tells TRT World.

Matthew Bryza, the former US ambassador to Azerbaijan, who has much knowledge and experience on the Karabakh conflict, is among the analysts who are optimistic that Baku and Yerevan can reach a peace settlement, particularly after the Prague meeting.

“At face value, if and indeed at that meeting Azerbaijan and Armenia recognised the sovereignty and territorial integrity of each other… That would mark an enormous step forward in pursuit of a peace treaty that settles the Karabakh conflict once and for all from the perspectives of both countries and lays the foundation of stable peace,” Bryza tells TRT World.

The legal status of Karabakh has long been “the most fundamental component of the dispute” between Azerbaijan and Armenia, he says. As a result, addressing this issue would help resolve much of the Caucasian conflict, he adds.

But Pashinyan has faced enormous opposition from both the previous government forces as well as other nationalists and Armenian diaspora communities in the US and France not to recognise the Karabakh region as part of Azerbaijani territory and keep the conflict alive in a hope that Yerevan could recover some territories lost to Baku, according to Bryza.

Will Armenia stop beating around the bush?

Beyond internal and diaspora opposition to Pashinyan, there is also a conceptual problem in Yerevan on whether the Karabakh region constitutes part of Azerbaijan territory, according to Fuad Chiragov, Deputy Director at Center for Studies of the South Caucasus, a Baku-based Azerbaijani think-tank.

Robert Kocharyan, the former Armenian president and prime minister who now leads the opposition against making a peace deal with Baku, also stated in the 2000s when he was leading the state that he recognised the territorial integrity of Azerbaijan, Chiragov says. “But Karabakh is a different issue,'' Kocharyan  adds, indicating that he does not see the region as part of Azerbaijan’s sovereignty, Chiragov says. Kocharyan is originally from the Karabakh region.

They also claimed that in the past USSR structure, both Azerbaijan and Karabakh were two different states, Chiragov says, despite the fact that the Soviet constitution clearly states that Azerbaijan is a republic and Karabakh is an autonomous region (oblast) like Nakhchivan in Azerbaijan SSR.

The constitution also stated that while republics could have the right for secession from the Soviet Union, autonomous regions like Karabakh could not separate from republics. As a result, the Karabakh region is part of Azerbaijani territory, according to international law. The international community recognises Azerbaijani sovereignty over Karabakh. A number of UN resolutions also condemned Armenian aggression against different Azerbaijani territories.

Also, he draws attention to the fact that the Armenian legislation passed a law in the past recognising the annexation of the Karabakh region to Yerevan, which is a clear indication to Baku that Armenia does not recognise Azerbaijan’s sovereignty over the region.

Despite some major obstacles, the Azerbaijani analyst finds what both sides were able to reach in the recent Prague talks “very important” against the wishes of the hawkish Armenian opposition and diaspora in the West, which “only care about their own interests” not the interests of Yerevan. A peace deal would make them “lose any reason to exist”, he says.

Joseph Shelzi, a research associate at the Soufan Center and a former intelligence officer in the US army, also sees the Azerbaijan-Armenia talks as “a major positive, especially considering the intensity of the fighting that took place in September.”

“At this stage in the peace process, the mediators are working with both states to agree to a framework agreement for eventual implementation. The top priority is to maintain the battlefield truce and continue the dialogue,” Shelzi tells TRT World. 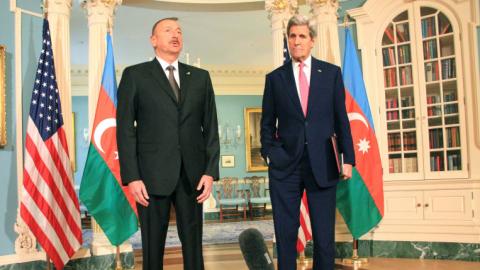 Azerbaijan to observe 1994 ceasefire in occupied-Karabakh