Sri Lanka's disputed prime minister Mahinda Rajapaksa will no longer be able to use government money for his day-to-day expenses. A similar motion to cut down the expenditure of all other ministers is planned.

Sri Lanka's parliament on Thursday agreed to cut the budget of the Prime Minister's office, a move designed to hinder disputed premier Mahinda Rajapaksa whose supporters boycotted the vote amid a weeks-long political crisis that shows no sign of ending.

Lawmakers opposed to Rajapaksa, who has lost two no confidence votes in parliament, regard his administration as illegitimate and say he should not be able to use government money for his day-to-day expenses.

"This means the prime minister will be dysfunctional. We will bring a similar motion tomorrow to cut down the expenditure of all other ministers," said Ravi Karunanayake, the former finance minister who proposed Thursday's motion which passed 123 to none in the 225-member parliament.

Thursday's vote comes more than a month after President Maithripala Sirisena triggered the crisis by ousting former Prime Minister Ranil Wickremesinghe and replacing him with Rajapaksa, who was then in turn sacked by parliament.

Rajapaksa loyalists said Thursday's vote is illegal because there is a pending court case over whether an attempt by Sirisena to dissolve parliament on November 9 is constitutional. The court is set to rule on that issue next week.

"This is illegal. We don't accept this as a legitimate motion," W.D.J. Seneviratne, a lawmaker in Rajapaksa's party, told Reuters before the vote.

"We have informed the speaker of our position and asked him not to allow this illegal motion to take up."

Rajapaksa, under whose rule Sri Lanka achieved its 2009 victory in a decades-long conflict against rebels from the Tamil minority, is seen as a hero by many among Sri Lanka’s Buddhist majority.

He has been accused by diplomats of human rights abuses during the war, which he denies. 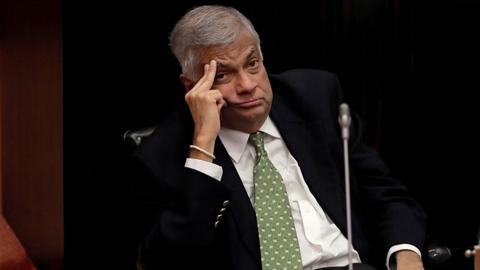