Taliban demands release of and names Anas Haqqani as member of team holding direct talks with US, as Russian and US envoys to Afghanistan plan to discuss Afghanistan situation in Ankara later this month.

The Taliban on Tuesday sought the release of one of its captive leaders in Afghanistan and named him as a member of the negotiation team for the second round of talks with the US, a demand that comes as US and Russian envoys plan to discuss Afghanistan in the Turkish capital Ankara later this month.

Taliban is pushing for the release of Anas Haqqani, a top leader of its offshoot Haqqani Network, who has been charged with some of the deadliest attacks in Kabul.

Mullah Baradar, who is leading the Taliban's political office in Qatar, named a total of 14 men led by Sher Mohammad Abbas Stanikzai to hold talks with US envoy Zalmay Khalilzad later this month in Doha.

"Mr Anas Haqqani has been appointed to the negotiation committee, but he has not been released [by the Afghan government] so far," Zabihullah Mujahid, the Taliban spokesman, said in a tweet.

Afghan officials had claimed they captured Haqqani from southeastern Afghanistan in 2014.

But Taliban says Haqqani was captured by the US forces in Bahrain from where he was sent back to Qatar and then handed over to Kabul.

The US envoy, Zalmay Khalilzad, is on a tour to coordinate efforts for peace in Afghanistan with partners in Europe, the Middle East and South Asia.

In a series of tweets following a meeting in Brussels with EU and NATO partners, Khalilzad said "jumpstarting" the intra-Afghan dialogue is an immediate priority.

"Our shared purpose is to reach a peace agreement (not a withdrawal agreement) that is worthy of the sacrifices made over decades of war," he said.

2/2 We went into #Afghanistan together, and together we will determine our future posture, based on conditions we determine with Afghans. We also agreed that jumpstarting the intra-Afghan dialogue is an immediate priority. pic.twitter.com/zBuEknTx56

The Taliban's demand comes a day after President Ashraf Ghani hinted at a ceasefire and release of prisoners in hopes of entering direct talks with the Taliban.

Ghani implemented two ceasefires last year, but only one was briefly reciprocated by the Taliban.

The Taliban continues to avoid recognising and meeting the Afghan government.

Kabul maintains that any peace plan should be Afghan-owned and Afghan-led.

Turkey to host Russia, US envoy

Meanwhile, Turkey will host a fresh round of Russia-US talks on Afghanistan in Ankara on February 22, the Russian envoy said on Tuesday.

Speaking at a news conference, Russia's Presidential Envoy to Afghanistan Zamir Kabulov announced his meeting with his US counterpart Khalilzad.

He said both sides agreed to meet at a neutral venue in the region and Turkey came up as a "comfortable" option.

"I offered our Turkish partners who are important players [in Afghanistan] to use this trip for bilateral consultations with Turkish colleagues about Afghanistan," he said.

"We made significant progress on vital issues"

US peace envoy to Afghanistan says talks with the Taliban are “productive” https://t.co/2bz0dO4xOG pic.twitter.com/qgzg0Jk9Ug

Another round of Moscow talks

Among other issues, the sides plan to discuss convening another round of the Moscow conference on the Afghan settlement, he said.

Kabulov praised the recent developments in the Afghan peace process, predicting that this year will be "decisive" for ending the 17-year war and "restoring an independent Afghanistan free of terror and drugs."

The Russian envoy said that upcoming presidential elections in Afghanistan will play a significant role as the winning candidate will be acceptable to all stakeholders. 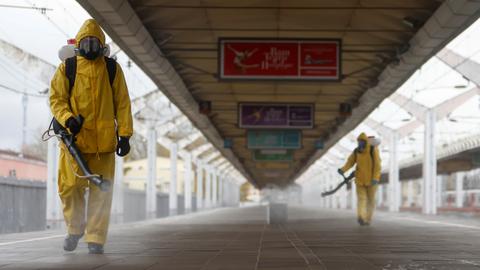