The highly militarised region has seen a spike in confrontation between locals and Indian forces, which are accused of human rights violations.

Protests flared in parts of Indian-administered Kashmir on Tuesday after police said a man being questioned in connection with a security investigation had died in custody, the latest disturbances in one of the world's most militarised regions.

Rizwan Asad Pandit, a chemistry graduate who taught at a private school, had been arrested as part of a "terror case investigation", a police spokesman said.

Inquiries were being carried out into the cause of his death, the spokesman said.

Pandit's brother, Zulkarnain Asad Pandit, was sceptical that any investigation would reveal the truth.

"We want an investigation of it but we know nothing is going to happen," the brother said.

"We've all seen investigations for the last 20 years."

Protesters threw stones at police in several parts of the Muslim-majority region following news of Pandit's death, with shops shutting in parts of the main city of Srinagar. Police responded with tear gas.

Tension between nuclear-armed India and Pakistan, which both claim Kashmir in full but rule it in part, escalated dramatically after a suicide car bomb killed at least 40 Indian paramilitary police on February 14.

A Pakistan-based militant group claimed responsibility for attack, which was carried out by a local Kashmiri man who had joined militants after being harassed by the police.

Rizwan Asad Pandit came from a family with links to the Jamaat-e-Islami (JeI), his brother said, a political group that wants independence from India for Kashmir.

The Indian government recently banned the group which it accuses of having links to militant organisations.

The security forces have arrested hundreds of JeI members since the February14 bomb attack. The group denies it is linked to militants.

"He was totally innocent and he had no affiliation with any militant outfit," Pandit's brother said.

Several prominent political figures in Kashmir condemned he death of the man.

"Punishment must be handed out to the killers of this young man," Omar Abdullah, a former chief minister of the state said on Twitter. 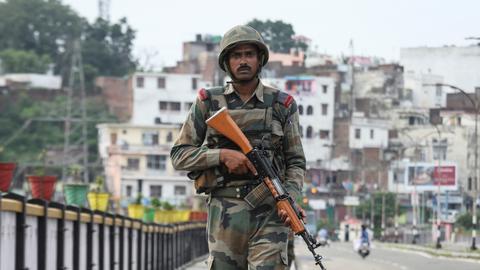 Troops lock down Kashmir as India votes to strip its status