The United Nations named a new interim UN resident coordinator for Myanmar on Tuesday, appointing Knut Ostby of Norway to take over the humanitarian role.

The new appointment comes at a time of growing strains with the Myanmar government over the handling of the Rohingya crisis.

The appointment of a temporary placeholder was expected after Myanmar blocked an upgrade of the UN country chief position.

Ostby, who has served with the UN in a number of hotspots, including Afghanistan and East Timor, will replace Renata Lok-Dessallien, who has completed a nearly four-year term.

Myanmar stalled a UN plan to upgrade the UN country head to the more powerful rank of assistant secretary-general (ASG) after Lok-Dessallien leaves.

Some 600,000 Rohingya Muslims, most of them children, have fled to Bangladesh after ethnic violence erupted in Myanmar's northern Rakhine state in late August.

Rights monitors and Rohingya refugees say the army and Rakhine Buddhist vigilantes have forced them to flee their homes.

UN investigators interviewing Rohingya living in refugee camps near Cox's Bazar said on Friday that they had gathered testimony pointing to a "consistent, methodical pattern" of killings, torture, rape and arson.

The fact-finding team, led by former Indonesian attorney general Marzuki Darusman, said the death toll from the Myanmar army's crackdown following Rohingya rebel attacks on August 25 was unknown, but "may turn out to be extremely high."

The UN team, which was established by the UN Human Rights Council in March, renewed its appeal for access to Rakhine state and for talks with the Myanmar government and military to "establish the facts."

In the early stages of the crisis, the UN described the military campaign as  a "textbook case of ethnic cleansing", an accusation rejected by Myanmar, which says its military was engaged in counter-insurgency operations against Rohingya rebels behind a series of attacks on security posts.

Suu Kyi has said the refugees can return, but thousands continue to arrive in Bangladesh.

Rohingya are a reviled minority in Myanmar and are denied citizenship, education and opportunity by the Myanmar government that regards them as illegal outsiders.

Myanmar is struggling to emerge from decades of military rule and in recent months, Myanmar's support for the army has surged – an unlikely turnaround for a once feared and hated institution that ruled for 50 years and whose lawmakers lost heavily in 2015 polls.

Earlier on Sunday, tens of thousands rallied in defence of Myanmar's army in Yangon city.

They carried banners lauding Commander-in-Chief Min Aung Hlaing and rebuked the international community for "pressuring the Tatmadaw" – as Myanmar's army is known.

The US is weighing targeted sanctions against key military leaders, while Pope Francis is scheduled to talk peace on a landmark visit to the country next month. 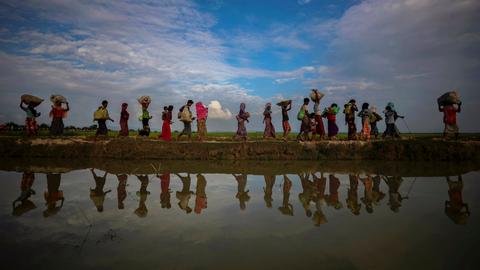